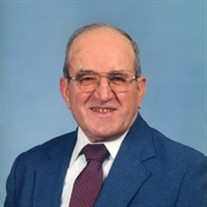 Plover...Glenn R. Hellickson, 94 of Plover died January 21, 2020 at the Palo Alto County Hospital in Emmetsburg.  Services will be held Monday 10:30 AM, January 27 at Trinity Lutheran Church, Mallard with burial to follow in Ellington Cemetery.  Visitation is from 2-4 Sunday at the Harris Funeral Home in Mallard.  Glenn Hellickson, the son of Joseph and Hannah (Eikedalen) Hellickson was born November 14, 1925 in Hardy, IA, where he was raised, educated and graduated from high school.  In 1945 he was united in marriage with Dorothy Williams in Fort Dodge.  The couple lived in the Havelock and Plover are during their lives.  Glenn worked as a hired hand for Shorty Peterson and Floyd Vadar.  He then worked as a feed mill truck driver for the Farmers Co-op Elevator in Plover.  Survivors include his children:  Leslie (Donita) Hellickson of Curlew, IA, Stanley Hellickson of Carroll, IA, Paul Hellickson of Plover, IA, Peggy (Dave) Lewis of Cylinder, IA, and daughter-in-law, Carol Hellickson of AZ; 22 grandchildren, many great grandchildren, a brother Gerald Hellickson from Utah, and sister in law, Louise Hellickson of Dayton, Ohio.  Glenn was a perfectionist when it came to his yard, flower and vegetable gardens.  He especially loved whenever his grandchildren would come to visit.  He was preceded in death by his parents, wife Dorothy in 1990, a son Bob, brothers Howard, Charles and Floyd and his sister, Frances. www.harrisfuneralservices.com

The family of Glenn R Hellickson created this Life Tributes page to make it easy to share your memories.

Send flowers to the Hellickson family.