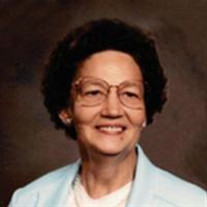 Grace E. (Anderson) Christensen, the daughter of Oswald and Othelia Laere Anderson, was born April 20,1925, in Colman, South Dakota. She attended country school and graduated from high school in Chester, South Dakota in 1943. After graduation, she attended General Beadle Teacher’s Normal College for a year and worked in Sioux Falls, at Hoyme Hatchery as a bookkeeper. On September 8, 1948, she was united in marriage with Elwyn Bernard Christensen at the First Baptist Church in Dell Rapids, South Dakota. After their marriage the couple lived and farmed and raised their five children in Iowa, in the Rolfe and Gilmore City area. Grace worked as a nurse’s aide at the Rolfe Care Center for several years and also worked in the dietary department at the Pocahontas Community Hospital for twenty-one years. She loved gardening, cooking and baking and put her talents to good use helping with 4-H and being a leader for a few years. She was a member of the First Baptist Church of Gilmore City and was involved in church activities. Grace lived out her days in Gilmore City where she and Bernard lived after retiring from farming in 1986. Survivors include her husband Bernard, Gilmore City; sons: Merle (Lynne) of Bridgewater, MA; Melvin (Becky) of Chester SD; Dr. Alan (Deborah) of Fairfax, VA; daughters: Bonnie Christensen of Tanana, AK; and Debra (John) Roe of Oklahoma City, OK; sixteen grandchildren, eight great-grandchildren; brothers: Harold Anderson of Chester, SD; and Richard (Pat) Anderson of Sioux Falls, SD; and her sister, Joyce (Ian) Ritchie of Santa Barbara, CA. Grace was preceded in death by her parents, and brothers, Laren, Garland and Maynard.

The family of Grace Eileen Christensen created this Life Tributes page to make it easy to share your memories.

Grace E. (Anderson) Christensen, the daughter of Oswald and Othelia...