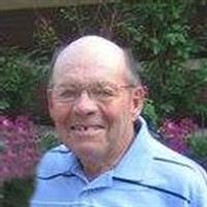 Hans Appel, 89, died Thursday, November 10, 2016 at Parc Hall in Emmetsburg, Iowa. Hans Appel was born on October 30, 1927, to parents Otto and Bothilda Hansen Appel. For years, he and his twin brother celebrated their birthdays on Halloween until, as adults, they needed birth certificates and discovered the proper day of birth. Hans claimed he was smuggled into America because his mother was pregnant with the twins on his parents’ voyage from Denmark. Hans joined the Army Air Corps in 1946 where he was assigned to weather school, beginning a lifelong interest in weather watching. Then following service, in accordance with Danish tradition as eldest son, he returned to take over the family farm in Graettinger. In addition, he worked as a supervisor for a dairy association which required he stay in several different homes every month. He said that was the luckiest move he ever made because it was in one of those homes he met Gwenna Grossnickle whom he married on June 7, 1951. Five children were born to this union. In 1954, Hans and Gwenna moved from the homestead to a farm in the city limits of Curlew. He was steadfastly devoted to his work and milked cows seven days a week until he sold the herd in 1986. Hans served as mayor of Curlew for forty years until he moved to his showcase home in the country, built at the edge of the gravel pit which had a long history as the swimming hole and ice rink for the surrounding area. Hans hoped that he was the “Appel of his Lord and Saviour’s eye” and faithfully served on a number of community boards. He was passionate about soil conservation before being green was popular. The trees, flowers, and manicured farmsteads he tended are evidence of his commitment to the land. Hans departed this world peacefully on November 10, 2016, at the age of 89. Left to cherish his memory are his wife, Gwenna; three daughters, Colleen (Tim McVeigh) Appel, Gayle (Rick) Doll, and Lori (David) Flores, and two sons, Mark (Kathy Burkholder) and Bruce (Joelle); grandchildren Molly, Forrest (Bethany), Jake (Kemi), Caleb (Mary Parr), Jesse, Zach (Jenna), Paul (Emma), Madeline, Sofie, and Jonathan; great-grandchildren Carson and Simon; his brothers Ingvert and Paul. Hans was preceded in death by his parents, his granddaughter Gretchen, and his siblings Henry, Einer, and Christian.

Hans Appel, 89, died Thursday, November 10, 2016 at Parc Hall in Emmetsburg, Iowa. Hans Appel was born on October 30, 1927, to parents Otto and Bothilda Hansen Appel. For years, he and his twin brother celebrated their birthdays on Halloween... View Obituary & Service Information

The family of Hans Appel created this Life Tributes page to make it easy to share your memories.

Send flowers to the Appel family.