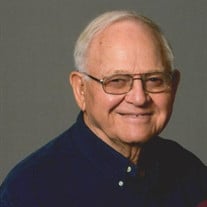 Harlan “Harley” Haas of Algona, IA, age 88, died peacefully on Saturday, March 27, 2021 at the Good Samaritan Center in Algona. Harley was a unique and caring man who touched the lives of all he knew. To those that knew him best, he was determined, resourceful, and always armed with a witty comeback. Born on May 15, 1932 in West Bend, IA to Herbert and Emma (Ketelsen) Haas, Harley was the youngest of four boys. The Haas brothers were very loyal to each other and to their family. He attended country grade school in Union Township and graduated from Algona High School in 1951. Harley met Helen Lenz, the love of his life, in high school and married her on June 28, 1953 at Trinity Lutheran Church in Algona. They raised three children while farming in their hometown of Algona. Although he understood the inner workings of the farm, Harley felt his true calling was to brighten the world. In 1967, he took a leap of faith leaving the farm to become an apprentice electrician, and after several years, he started his own business, Haas Electric. In 1985, Harley and Helen moved to Sheldon, IA where he continued to do electrical work in addition to taking on a sales role for Wick Buildings. Eager to get back to their roots, Helen and Harley returned to Algona in 1998. He continued working as an electrician until he was hired to serve in the favorite job of his career, the City of Algona’s building and electrical inspector. He truly enjoyed connecting with people and the town he loved so much. Harley always had a love for people. He would help anyone that asked. His strong faith in God fueled him to believe in everyone’s potential, even if they did not see it themselves. A lifetime member of Trinity Lutheran Church, he was proud to serve in whatever way he could. He was a member of the Iowa Association of Electrical Inspectors and served on the Care Review Committee at Good Samaritan. Harley is survived by his wife of 67 years, Helen of Algona and his three children, Holly Cunningham of Carrollton, TX; Hal (Susan) Haas of North Richland Hills, TX; and Howard (Sue) Haas of Algona. Harley also had seven grandchildren and one great-grandchild who loved him dearly; Austin (Jayme and Lucas) Cunningham of Spring, TX; Dillon Cunningham of Colorado Springs, CO; Britton (Adam) Merritt of Arlington, TX; Matthew Haas of Norman, OK; Samantha (Ethan) Secor of Ames; Karina Haas of Altoona; and Scott Haas of Sioux City. Harley is also survived by many nieces and nephews as well as his three sisters-in-law, Jean Blume of Brookings, SD; Pauline (David) Calwell of Topeka, KS; and Maxine Haas of Algona. He was preceded in death by his parents; brothers, Roland “Rollie” Haas and his wife Elvera “Scotti”, Jim Haas, and Gerald “Jerry” Haas and his wife Jean; twin sisters in infancy; and brother-in-law, Harry Blume. Memorial services will be 10:30 a.m. on Thursday, April 8, 2021 at Trinity Lutheran Church in Algona, with Rev. Tom Schlund officiating. Services will be live-streamed on Trinity Lutheran Church’s YouTube page https://youtu.be/SPTxLMAs9t8. Burial will be at East Lawn Cemetery in Algona. Visitation will be from 9:00 a.m. until the time of the service. Masks are required for all events. The Lentz Funeral Home of Algona is serving the family. Condolences may be left at www.lentzfuneralhome.com

Harlan &#8220;Harley&#8221; Haas of Algona, IA, age 88, died peacefully on Saturday, March 27, 2021 at the Good Samaritan Center in Algona. Harley was a unique and caring man who touched the lives of all he knew. To those that knew him... View Obituary & Service Information

The family of Harlan Haas created this Life Tributes page to make it easy to share your memories.

Send flowers to the Haas family.