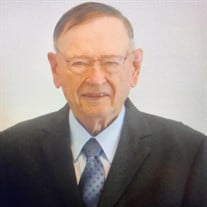 Harlan Sonksen, age 89, of Mallard passed away on August 6, 2021 at Lutheran Hospital in Des Moines. Funeral services will be held on Tuesday, August 10, 2021 at 10:30 AM at Trinity Lutheran Church in Mallard. Burial will take place at Rush Lake Cemetery in Curlew. Visitation will be held on Monday from 5:00 PM until 7:00 PM at Trinity Lutheran Church in Mallard. Harris-Lentz Funeral Home of Mallard is assisting the family. Harlan Carl Sonksen, son of Carl and Anna (Otto) Sonksen, was born on March 22, 1932, in Booth Township, Palo Alto County. He graduated from Mallard Community School in 1950 and served in the U.S. Army from 1953-1955 as a Private First Class and was stationed in Korea. Upon completion of his service, Harlan returned to the family farm. He met Trudy and the couple was married on Oct. 7, 1956, in Ayshire. Harlan and Trudy remained on the farm for many years where they raised their children, Lori, Larry, and Steve. Harlan was passionate about his farming. In 1994, Harlan “retired” and he and Trudy moved to Mallard. Even then you couldn’t keep him off the farm. He was still going out to lend a hand at 89 years old. Harlan was an avid fisherman and took many trips to Canada with friends and family. He was baptized and confirmed in the Lutheran church and was a longtime member of Trinity Lutheran in Mallard where he taught Sunday school for 30 years and served as elder, trustee, and held various offices. Harlan also served as a school board member for Mallard Community School for many years. Harlan was preceded in death by his parents, Carl and Anna, brother and sister-in-law, Arnold and Beverly Sonksen, and brothers-in-law Roland Welander and Alan Rustan. He is survived and lovingly remembered by his wife Trudy, children Lori (Koy) Goodchild, Larry (Karla) and Steve, 7 grandchildren, 17 great-grandchildren, sister Beverly Welander, brother-in-law, sisters-in-law, and many nieces and nephews. Harlan is now home with his Lord and Savior.

Harlan Sonksen, age 89, of Mallard passed away on August 6, 2021 at Lutheran Hospital in Des Moines. Funeral services will be held on Tuesday, August 10, 2021 at 10:30 AM at Trinity Lutheran Church in Mallard. Burial will take place at... View Obituary & Service Information

The family of Harlan Sonksen created this Life Tributes page to make it easy to share your memories.

Send flowers to the Sonksen family.