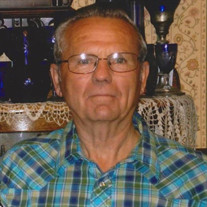 Harold “Sonny” Lane, age 86 of Livermore, passed away Tuesday, March 22, 2022 at the Humboldt County Memorial Hospital in Humboldt. Funeral Services will be held on Monday, March 28, 2022 at 10:30 AM at Immanuel Lutheran Church in Livermore. Burial will take place at Union Cemetery in Livermore. Visitation will be held on Sunday, March 27, 2022 from 2:00 PM until 4:00 PM at Lentz Funeral Home in Livermore. Lentz Funeral Home of Livermore is assisting the family. Harold (Sonny) Edwin Lane, the son of Everett and Mary (Rutter) Lane was born on January 11, 1936. He graduated from Livermore High School in 1955. Upon graduation, he entered the US Army. He served in the military from 1955-1957. On January 5, 1958 Sonny was united in marriage with Marilyn Vaudt at the Immanuel Lutheran Church in Livermore. He was employed by Dodgen Industries for 42 years. He was a member of Immanuel Lutheran Church in Livermore. Sonny enjoyed spending time with his beloved wife, fishing, hunting, and working outside around the house in the yard. Sonny is survived by two sons, Jeff Lane, of Humboldt and Craig (Barbara) Lane of Waupaca, WI: five grandchildren: ten great grandchildren; half-sister, Susan Lawler of Ames; two half-brothers, James Lane, of Storm Lake and Bruce Lane of Colorado. He was preceded in death by his dear wife, Marilyn; son, Jerry; his parents and a sister, Doris Pressler.

The family of Harold "Sonny" Lane created this Life Tributes page to make it easy to share your memories.

Send flowers to the Lane family.