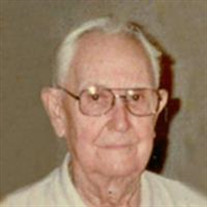 Howard Thomas Wood was born September 27, 1914, to Thomas Enos Wood in Iowa City, Iowa. His mother was unknown. Howard spent his childhood in and around Webster City, Iowa. He attended Lawn Hill School through 4th grade. He then attended school in Kossuth County through 8th grade. Howard's early career was spent as a farm laborer. From 1943 to 1946 he worked at Farmers Co-op in Woolstock, Iowa. From September, 1946 to November, 1954 he managed the elevator in West View, Iowa. He became a USDA warehouse examiner in 1954. He retired from his government position in 1975. After retirement he continued to measure elevators privately for extra income. On November 13, 1935, Howard married Cecile Hanus. They had a son, Eldon, born May 21, 1936. Howard and Cecile divorced in 1938. Howard continued living in the Woolstock area. He met and married Wilma O'Connor on September 16, 1946. They enjoyed 59 years of marriage. Wilma and Howard lived in West Bend, Iowa from 1955 until her death in January, 2006. They enjoyed wintering in Donna, Texas, where they had many friends, from 1977 through 1997. They were long time parishioners of the United Methodist Church in West Bend. Howard was also a memeber of the Moose Lodge. Howard was very good at nursing Wilma or anyone else that he could help. He also enjoyed doing yard work and always had such beautiful flowers. Howard's house was his pride and joy. He did most of the house work after he retired. August 5, 2007, Howard sold his house and moved into Prairie Creek Assisted Living in West Bend. He was a resident at the West Bend Care Center from April 1, 2010, until his death there October 10, 2012. Howard is survived by his son, Eldon, and his wife Carol Jean; two grandchildren: Michelle St. John and Michael (Kris) Wood; four great grandchildren: Jason (Blaire) St. John, Jessica (Wes) Brammel, Tymothy and Logan Wood; and two great great grandchildren: Bentley and Lawson St. John. Howard was preceded in death by his father, Thomas, wives Cecile McCarty and Wilma Wood and granddaughter Debra Wood.

The family of Howard Wood created this Life Tributes page to make it easy to share your memories.

Send flowers to the Wood family.