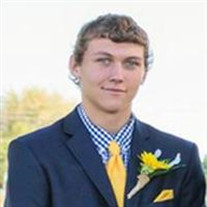 West Bend... Hunter Origer, 17, of West Bend, died April 5, 2017 as a result of injuries sustained in a motor vehicle accident. Funeral services will be held 10:30 a.m. Monday, April 10, 2017 at Sts. Peter and Paul’s Catholic Church. Burial will be held in West Bend Cemetery. Visitation will be held from 4:00 – 8:00 p.m. Sunday at the church. Harris Funeral Home is in charge of arrangements. Hunter Jake Origer, the son of Jack and Annabell Origer, was born October 6, 1999 in Emmetsburg, Iowa. He attended school in West Bend and also attended Bishop Garrigan for 2 years. Hunter played football and ran long distance in track. He could always be found riding 4 wheelers or dirt bikes with his friends. He built his own computer and played Minecraft for hours. He will always be remembered by his great sense of humor, silly antics and contagious smile. Services will be held Monday, April 10, 2017, 10:30 AM at Sts. Peter and Paul's Catholic Church, West Bend with burial to follow in the West Bend Cemetery. Visitation is from 4-8 PM Sunday at the church where a vigil service will be held at 7:30 PM. Sometimes we don’t know how someone will touch our life, some by coming, some by leaving, some by doing both. Hunter loved and included everyone and had a special gift for never judging. In life, Hunter was always giving. In death by organ donation he continues to give. He helped over 100 people and gave the gift of sight to two people. Survivors include his parents Jack and Anna; his sisters Nichole Origer, Sierra (Cory) Elbert, Jacquelyn Origer, and his brother Josh Origer; his nephew Romeo and niece Violet; his grandmothers Darlene Origer and Kathryn Lucas; numerous aunts, uncles and cousins. He was preceded in death by his grandfather Gregory Origer and uncle Nick Origer. In lieu of flowers, memorials may be left to the discretion of the family. www.harrisfuneralservices.com

The family of Hunter Jake Origer created this Life Tributes page to make it easy to share your memories.

Send flowers to the Origer family.