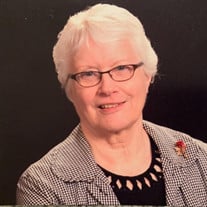 Iola Chickering, age 81, of Algona passed away on Tuesday, April 12, 2022 at the Algona Manor. Funeral services will be at 10:30 AM on Saturday, April 16, 2022 at the First United Methodist Church in Algona. Burial will take place in Riverview... View Obituary & Service Information

The family of Iola Chickering created this Life Tributes page to make it easy to share your memories.

Iola Chickering, age 81, of Algona passed away on Tuesday, April...

Send flowers to the Chickering family.