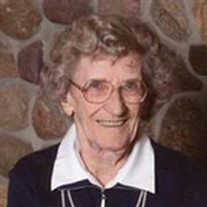 Irene Julia Rick, daughter of Noah and Elizabeth Schmidt Anliker was born May 30, 1922 near West Bend IA, where she was raised and received her education. At an early age she began working in restaurants to help augment the family income. This became her lifetime career as she owned and operated several restaurants including the Bradgate Restaurant, Joe and Ole's in Fort dodge, The Grotto Restaurant, The Aloha, and Tommy Tucker's in West Bend. In 1942 she met and married James E Neighbors, Sr. and to this union her beloved son was born. On July 26, 1969 she married Lyle E. Rick in West Bend. Together they renovated and operated restaurants in West Bend and operated Sunset Bay Resort on Lake Mary near Alexandria, Minnesota for several years. After her retirement, Irene kept busy quilting, gardening and baking; especially her famous sugar cookies. Most of all she loved spending time with her precious grandchildren and great grandchildren. She moved to Ruthven 13 years ago to be closer to her son and family. Irene died October 1, 2017 at the Palo Alto County Hospital in Emmetsburg, following complications from a stroke, having reached 95 years of age. She was a longtime member of the Apostolic Christian Church. Survivors include her son Jim (Sharon) Neighbors of Ruthven, IA, granddaughter Jennifer(Rick) Coltvet of Elkhorn, NE, grandson Jeff (Liz) Neighbors of Johnston, IA, great grandchildren: Cassie and Luke Coltvet, Paige, Julia, and Lexi Neighbors, brother Dan (Delores) Anliker of Mediapolis, IA, sisters, Leona (Don) Lanus of Algona, IA, Rachel (Dennis) Fuller of Humboldt, IA, Esty (Mike) Steil of West Bend, IA, brother-in-law Lewis (Mary) Rick of Mason City, sister-in-Laws, Ruth Rick of Mason City, IA, and JoAnn Harken and many loving and caring nieces, nephews and cousins. She was preceded in death by her parents, husband, brothers, Ray, Richard, Earl and Paul, and sisters, Alice, Helen and Hazel. www.harrisfuneralservices.com

Irene Julia Rick, daughter of Noah and Elizabeth Schmidt Anliker was born May 30, 1922 near West Bend IA, where she was raised and received her education. At an early age she began working in restaurants to help augment the family income. This... View Obituary & Service Information

The family of Irene Julia Rick created this Life Tributes page to make it easy to share your memories.

Send flowers to the Rick family.