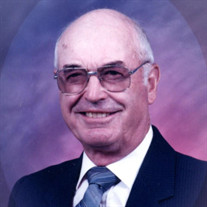 Irvin J. Kenne, 91, of Mason City, Iowa, formerly of Algona, Iowa, died Thursday, May 28, 2020, at IOOF Home in Mason City, Iowa. A private family Mass of Christian Burial will be held at 10:30 AM on Tuesday, June 2nd at St.Cecelia Catholic Church in Algona with Rev. Ed Girres celebrating. Mass will be livestreamed on the Five Saints Catholic Community YouTube page: www.youtube.com/user/stceceliaalgona. Burial will take place following the Mass at Calvary Cemetery in Algona with Military Rites conducted by the Iowa National Guard Honor Detail. Graveside services will be livestreamed on the Lentz Funeral Home Facebook page https://www.facebook.com/Lentz-Funeral-Home-122511234501273/. Visitation will be held on Monday from 4:00 – 6:00 PM at Lentz Funeral Home. Due to the COVID-19 Pandemic, social distancing practices will be followed. Irvin, son of Roy and Lena (Von Bank) Kenne, was born on December 11, 1928, on a farm near West Bend, Iowa. He attended rural country schools through the eighth grade. Irvin married Alvina Freilinger on June 3, 1953, and together they farmed near West Bend, Iowa until moving to Algona. Alvina preceded him in death on October 11, 2015. Irvin’s life centered around family, farming and faith. He enjoyed spending time with his children and grandchildren whether it was hunting, fishing during summer Kenne camp or getting together for holiday meals and family fun. Alvina and he enjoyed traveling, bus trips and visiting family and friends. Farming was a way of life for him. He began his farming career with teams of horses on his parents’ farm and ended it driving GPS guided tractors. Irvin was a faith filled member of his parish, volunteering to help at funeral dinners, church activities and with the men’s group. He also served in the US Army during the Korean Conflict from 1951-1953 and had the opportunity to go on an Honor Flight to Washington DC. Irvin was a member of the Algona American Legion. Survivors include his children, Diane (Kevin) Casey, of Cuba City, Wisconsin, Donna (Ron) Fuchsen, of Marshalltown, Iowa, Dale (Lynnette) Kenne, of Coralville, Iowa, Doris (Tom) Junck, of Sioux City, Iowa, Danette (Patrick) Benoit, of Urbandale, Iowa, and Darlene (Joe) Behr, of Mason City, Iowa; 14 grandchildren, Kelly Maersch, Chris and Sean Casey, Kristin Drabek and Jeremy Watts, Kurtis and Kimberly Kenne, Amanda Kellen and Emily Ehlers, Rebekah Benoit, and Abbey Molitor, Dan Behr, Meredith Petersen and Shannon Behr; and fifteen great-grandchildren, Delaney Maersch, Connor, Chloe, Colton and Callie Casey, Brooke and Maxwell Drabek, Addysen, Kaylee and Easton Kellen, Theo and August Molitor, and Abel, Lyla and Gavin Behr. He was preceded in death by a brother, Marvin (Sharon) Kenne; a son-in-law, Kip Watts; and a granddaughter, Kathleen Casey. In lieu of flowers an Irvin J. Kenne Memorial Fund has been established.

The family of Irvin Kenne created this Life Tributes page to make it easy to share your memories.

Send flowers to the Kenne family.