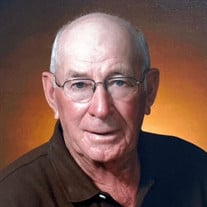 James "Jim" Brown, age 93 of Mallard, passed away Sunday, August 29, 2021 at Parc Hall Nursing Home in Emmetsburg. Funeral services will be held on Thursday, September 2, 2021 at 10:30 AM at the Mallard United Methodist Church in Mallard. Burial will take place at Rush Lake Cemetery in Curlew with Military Honors conducted by the Anderson-Eckert-Hersom Post 345 American Legion in Mallard. Visitation will be held on Wednesday from 5:00 PM until 7:00 PM at Harris Funeral Home in Mallard. Jim Brown was born in Omaha, NE, on October 7, 1927. He grew up in Varina, Newell and Albert City areas. When he was a senior in high school, he moved with his family to a farm near Mallard, IA. After graduation, he enlisted in the Marine Corps. He served aboard the USS Providence during the closing years of WWII. He met his future wife, Isolina “Betty” Consilvio D’Ercole while at a USO dance in Livorno, Italy. In 1948, he was assigned to Camp Le Jeune, NC. Betty arrived at Ellis Island a short time later. Due to paperwork issues, she did not leave Ellis Island for three months. On December 28, 1948, she traveled to Camp Lejeune to reunite with Jim. That day, they were informed by an immigration officer that the War Bride Act had expired and that Betty would be deported if they were not married by midnight that day. They were married by a justice of the peace in Jacksonville, NC, at 11:00 pm that evening. The JOP officer even made them a wedding cake. In 1950, Jim and Betty returned to Iowa and settled on the farm in rural Mallard. Jim was called up again in 1951 and sent to Korea, where he was wounded by a Chinese grenade. After a couple of months at the Great Lakes Naval base, Jim was finally able to return to Iowa and take up farming until his retirement in 2004. To this union four children were born: Nancy, Jerry, Barb and Diana. Betty’s life tragically ended in a car accident in Mallard in 2010. Jim was a 70 year member of the Anderson-Eckert-Hersom Post 345 American Legion in Mallard and a Lifelong member of the Mallard United Methodist Church. He also served on the Mallard School board and on the West Bend Elevator board. Survivors include children Nancy ( Doc) Nesheim of Mallard IA, Barb (Scott) Benz of Lake City IA, and Diana (Don) McKim of Creston IA, 9 grandchildren: Jason (Kelly) Nesheim, Heidi (Bryan) Heinz, Corey (Abby) Brown, Abbey Brown, Brian ( Liz) Brown, Sarah Benz, Emily (Nate) Daedlow, Ryan (Brittany) McKim, Katie McKim, and 17 great grandchildren: Claire, Regan, Cael Nesheim, Jackson, Conner and Logan Brown, Raven and Saige Brown, Cayden, Jace, Carter, Maci, and Adelyn Brown, Lauren and Sydney Heinz, Irie and River Daedlow. He was preceded in death by his parents, Wilson and Lucille Brown, his wife of 62 years Betty, his son Jerry, his grandson Jed Nesheim, and his sister Patricia Chandler.

James "Jim" Brown, age 93 of Mallard, passed away Sunday, August 29, 2021 at Parc Hall Nursing Home in Emmetsburg. Funeral services will be held on Thursday, September 2, 2021 at 10:30 AM at the Mallard United Methodist Church in Mallard. Burial... View Obituary & Service Information

The family of James "Jim" Brown created this Life Tributes page to make it easy to share your memories.