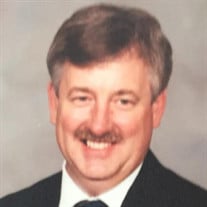 James Hassett, age 74 of Humboldt passed away Wednesday, November 24, 2021 at the University of Iowa Hospital in Iowa City. A private family funeral service will be held on Thursday, December 2, 2021 at Oak Hill Church in Humboldt. Services will be live streamed on Lentz Funeral Home's Facebook page https://www.facebook.com/Lentz-Funeral-Home-122511234501273. Burial will take place at Union Cemetery in Humboldt with Military Honors conducted by the Humboldt American Legion Post #119 and Sather’s Odgaard VFW Post #5240. Everyone is invited to attend James' Graveside Services. Please plan to meet at Oak Hill Church at 1:45 PM Thursday to join the procession to Union Cemetery. A Public visitation will be held from 4:00 pm until 6:00 PM on Wednesday, December 1, 2021 at Oak Hill Church in Humboldt. Lentz Funeral Home of Humboldt is assisting the family. www.lentzfuneralhome.com James (Jim) Michael Hassett was a loving husband, father, brother, and friend to so many people. He was a man of faith and always walked through life with God. Jim spent his life wearing many hats. After high school, Jim served his country from 1967 to 1973 in the United States Air Force. He was very proud of his service to his country and loved to support the military and its soldiers. Shortly after leaving the military, Jim met the love of his life, Donna Jean Webb. Shortly after they were married and spent over 40 years together in loving marriage. In 1983, Michael James Hassett was born and Jim spent the last 38 years as an amazing and loving father. In his professional life, Jim worked as a food broker where he developed relationships all over the state of Iowa. He loved what he did, and his work always gave him the time to support his wife, Donna and son, Mike. Most importantly, Jim loved his family. He spent every moment that he could with his wife and son. He was a devoted son to his mother, Anna, and father, Bob. He was a wonderful brother to six brothers and sisters: Bob, Rusty, Micki, Pat, Dick, and Joe. Jim loved the community of Humboldt, golf, fishing, and his friends. He participated in numerous groups in Humboldt and never missed a Thursday night of golf during the season. His morning coffee was another highlight of his day. He never wanted to stay out of touch with his friends or what was going on in the community. Jim also loved sports. In his youth, he played many sports including basketball and baseball at St. Edmunds in Fort Dodge, IA. He even played baseball in the military during his tour of duty. He spent many years coaching his son Mike in basketball and baseball. He loved to share his wisdom with young people. He also loved the Iowa State Cyclones and the Humboldt Wildcats. Jim is survived by his wife, Donna Hassett; son, Michael (Megan) Hassett; siblings, Bob (Lynda) Hassett III, Pat Hassett, Micki (Don) Laddusaw, Rosemary "Rusty" Hassett and Dick (Peggy) Hassett and five grandchildren. He was preceded in death by his parents, Robert and Anna Marie Hassett and brother, Joe Hassett.

James Hassett, age 74 of Humboldt passed away Wednesday, November 24, 2021 at the University of Iowa Hospital in Iowa City. A private family funeral service will be held on Thursday, December 2, 2021 at Oak Hill Church in Humboldt. Services... View Obituary & Service Information

The family of James Hassett created this Life Tributes page to make it easy to share your memories.

Send flowers to the Hassett family.