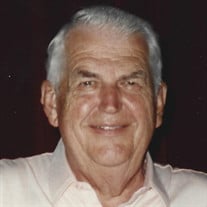 Not sure what to send?

James “Jim” Muller, age 93, of Whittemore passed away on Saturday, January 8, 2022 at the West Bend Care Center. Memorial Mass of Christian Burial will be held on Saturday, May 28, 2022 at 11:00 AM at Divine Mercy Catholic Parish - St. Michael's in Whittemore. Inurnment will take place at St. Michael's Catholic Cemetery in Whittemore. Visitation will be held from 10:00 AM until the time of Mass at 11:00 AM at Divine Mercy Catholic Parish- St. Michael's in Whittemore. James Martin Muller, the son of William and Grace (Gunn) Muller, was born on August 19, 1928 in Whittemore, Iowa. He attended St. Michael’s school and graduated from the Presentation Academy in 1946. He later graduated from barber school and began his career as a barber in Whittemore. Jim was united in marriage to Joanne Germann in September of 1950 at St. Michaels Catholic Church in Whittemore. Later in life he married Janet (Menke) Winkel in 2004. Jim was a member of the Whittemore Community Club, gun club, golf club, and Holy Name Society. Left to cherish Jim’s memory are his children, Nancy (Paschal Grehan) Muller of Whittemore, Michael (Cheryl) Muller of Ankeny, Iowa and grandson, Ryan (Ashley) Muller of Norwalk, IA. He is also survived by step-children Barb (Mike) Stence of Algona, John (Patrice) Winkel of Cedar Rapids, Cheri (Randy) Hinners of Emmetsburg, Tom (Lori) Winkel of Algona, Marilyn (Roger) Rouse of Algona and Marlene (Jerry) Hansen of Estherville and a brother-in-law, Dennis Weber, West Bend Care Facility. He was proceeded in death by his wives, Joanne and Janet, a grandson, Chad Muller, and his parents.

The family of James "Jim" Muller created this Life Tributes page to make it easy to share your memories.

James “Jim” Muller, age 93, of Whittemore passed away on Saturday,...