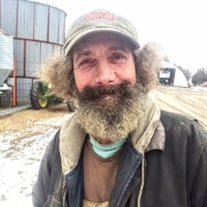 James C. Weinzetl, 61, of Bancroft, NE, passed away Thursday, June 6, 2019 in Pender, NE. A Celebration of Life Service will be held on June 22, 2019 from 11:00 a.m. until 1:00 p.m. at PC Harris Hall in Mallard, IA. Burial will be held at 1:00 p.m. on June 22, 2019 at St. Mary’s Catholic Church Cemetery near Mallard, IA. Memorials may be directed to the Palo Alto County Conservation in Ruthven, IA. Arrangements are under the direction of  Harris Funeral Home of Mallard.       Jim was born in Emmetsburg, IA on August 1, 1957 to Clarence “Doc” and Alice (Schumacher) Weinzetl. He attended school in Mallard, IA. Jim farmed near Bancroft. He worked cattle, cut hay, fixed fence, and everything else farm related kept Jim busy. Jim was known for his imagination to fix anything that was broken. He retired from farming in February of 2019 due to health reasons. Jim enjoyed family gatherings whenever farming allowed. When he had a free moment, he could be found fishing or telling crazy fishing trip stories.      Jim is survived by his mother, Alice Weinzetl of Emmetsburg, IA; sisters, Linda Weinzetl of Sioux City, IA and Susan (John) Feld of Swea City, IA; nieces and nephews, Jeffrey (Nai) Feld of Virginia Beach, VA, Amy (Don) Mumford of Pocahontas, IA, Jason (Jessica) Feld of Milford, IA; great-nieces, Rylee and Madalynn Feld and Dakota and Josephine Mumford. Jim is also survived by many cousins and special friends.      He was preceded in death by his father, Clarence “Doc” Weinzetl.

The family of James C. Weinzetl created this Life Tributes page to make it easy to share your memories.

Send flowers to the Weinzetl family.