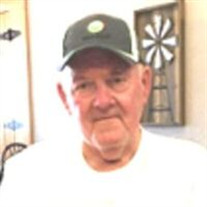 The service for James will be on the local channel 910 and YouTube. https://www.youtube.com/user/stceceliaalgona James Anthony Wiese formerly of Auburn, Iowa and Sioux Falls, South Dakota passed away on December 10, 2020 at West Bend Care Center due to declining illness. His socially distanced funeral service Friday, December 18, 2020, 11:00 AM at Sts. Peter & Pauls Catholic Church, West Bend, Iowa. Masks will be required. Burial will be in West Bend. Jim was born June 13, 1938 in South Sioux City, Nebraska to Fred and Blanche(Frank) Wiese. He was a Seaman Recruit for the United States Navy and Honorably Discharged July, 1957.  He also was a 25 year member of the Knights of Columbus, served as a lector for the St Mary’s Catholic Church in Auburn, Iowa and Sts. Peter & Pauls Catholic Church, West Bend, Iowa. Jim had ‘four loves’ during his life. His first two were big equipment and trains! Jim worked as a grader operator and then as a skilled saw operator for 30 years at Egger Steel in Sioux Falls before retiring. Trains were his passion. Even to his last few days, Jim wished he were sitting by the railroad tracks watching the engines pass by. He was known as the “Train Man” and “Uncle Jim” in West Bend, Iowa! He was often seen sitting on the grassy area between two rail lines giving his home baked banana bread to the conductors.  It has been said he gave out 91 loaves of banana bread.  He could also be seen entering a local business not to really buy anything, but just to visit with people. He loved to chat. His other two loves were women named Rita! He met Rita Burke at a singles dance and decided to take dancing lessons in order to get to know Rita better. They were married on July 28, 1980 and were together for 29 years up to Rita’s passing on October 14, 2009.  When he married Rita, he became a Step-Dad and a Grandpa! His next love was Rita Schmallen from West Bend, Iowa.  They, too, met at a dance! They spent many years attending local and area dances, going to A&W, and daily praying the rosary together. Jim was a very kind and prayerful man. Grateful for having shared his life are his stepchildren Ron (Brenda) Burke from Blackshear, Georgia; Charlene Burke Myers of Sioux Falls, SD; Pam Strohfus (Chris Steege) of Eagle, Idaho, and Kathy Monahan of Marshall, Minnesota, many grandchildren, great grandchildren, Wiese/Burke relations, and the Rita Schmallen family. Jim was preceded in death by his wife, Rita, his parents Fred and Blanche Wiese, two brothers Paul and Robert, Grandson David Ernesti and son-in-law, Joe Monahan. A socially distanced Open House will follow services at the Park View Inn Conference Room. Cards may be given in person or mailed to the Family of James Wiese, c/o Charlene Myers, 2912 E Hearthstone Pl, Sioux Falls, SD 57108.  It is important to note that Jim called West Bend his HOME.

The service for James will be on the local channel 910 and YouTube. https://www.youtube.com/user/stceceliaalgona James Anthony Wiese formerly of Auburn, Iowa and Sioux Falls, South Dakota passed away on December 10, 2020 at West Bend Care... View Obituary & Service Information

The family of James Anthony Wiese created this Life Tributes page to make it easy to share your memories.

The service for James will be on the local channel 910 and YouTube....

Send flowers to the Wiese family.