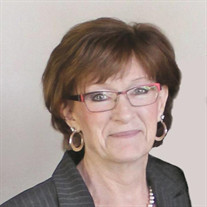 Janet Barnes, age 64, of Emmetsburg, passed away after a three-and-a-half-year battle with pancreatic cancer, Janet peacefully entered eternal life with her family at her side on Saturday, October 3, 2020 at Palo Alto County Hospital. Mass of Christian Burial will be 11:00 AM on Wednesday at the Holy Family Catholic Church in Emmetsburg. Burial will take place in St. John’s Catholic Cemetery. Visitation will be 4:00 – 7:00 PM on Tuesday at Holy Family Catholic Church. Masks will be required. Funeral arrangements are under the direction of Lentz Funeral Home in Algona. In lieu of flowers, memorial donations may be made to the family of Janet Barnes. Janet Josephine (Gappa) Barnes, daughter of Andrew (Joe) & Mary (Moses) Gappa was born on November 3, 1955 in Emmetsburg, Iowa. She attended St. Ellen’s Grade School and St. Mary’s Academy, and graduated from Emmetsburg High School in 1974. Janet continued her education at Iowa Central Community College in Fort Dodge and Iowa Lakes Community College in Emmetsburg. On September 4, 1976 Janet was united in marriage to Andrew Barnes at St. Thomas Catholic Church in Emmetsburg, Iowa. Janet and Andy were blessed with three children and 44 years of marriage. Janet was a member of Holy Family Catholic Parish in Emmetsburg. She was a devoted mother, wife, and friend to all. Janet was active with The Emmetsburg Chamber of Commerce, the Palo Alto Senior Citizens, and she was also a member of the Catholic Daughters of America (CDA). Janet was employed by the Iowa Trust and Savings Bank in Emmetsburg for 42 years. She began her career there in the bookkeeping department and then worked as a teller. Janet retired as Assistant Vice President, helping customers with a variety of banking services. Janet loved her job at Iowa Trust and was so thankful to have made so many friendships through her work. Janet’s Catholic faith was central to how she lived her life and she was truly blessed with the gift of kindness. She believed that serving others was one of the most important things that she could do. She loved helping others and was a true friend to all. She was thankful to have many great friendships in life. Janet’s greatest joy and blessing in life was her family. She enjoyed riding motorcycles with Andy, loved spending time with her three kids, and she especially loved being with her five grandchildren. She celebrated every holiday and birthday to the fullest with each of them, and they always knew they were loved beyond measure. Janet’s zest for life and her fun personality were a beautiful gift to all who knew her. Janet was preceded in death by her father, Andrew (Joe) Gappa, her brother Bill Gappa, her grandparents Bill & Marian Moses and Andrew and Josephine Gappa, and her good friend Ruth Clasen. Grateful for having shared her life is her husband, Andy of Emmetsburg, her three children, Holly (Matt) Harnden of Clive, Tony Barnes (Jake) of Des Moines, Jackie Barnes of Johnston, and her five grandchildren, Zach, Macy, Haley, Max & Carly Harnden, all of Clive. She is also survived by her Mother, Mary Gappa of Emmetsburg and her siblings Joe (Zeline) Gappa, Mary Kary Orsborn, Carolyn (Terry) Lowman, Marcia (Bill) Lapczenski, Jill (Joe) Thompson, Todd (Lisa) Gappa, and Paul Gappa, all of Emmetsburg, and many nieces and nephews.

Janet Barnes, age 64, of Emmetsburg, passed away after a three-and-a-half-year battle with pancreatic cancer, Janet peacefully entered eternal life with her family at her side on Saturday, October 3, 2020 at Palo Alto County Hospital. Mass... View Obituary & Service Information

The family of Janet Barnes created this Life Tributes page to make it easy to share your memories.

Janet Barnes, age 64, of Emmetsburg, passed away after a three-and-a-half-year...

Send flowers to the Barnes family.