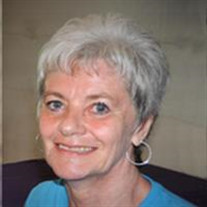 Ottosen: Janet M. Welter, 67 of Ottosen, died Tuesday December 29, 2015 at the Kossuth Regional Health Care Center in Algona. A time of remembrance will be held from 1-5 PM Sunday at the Harris Funeral Home in West Bend. Janet Schafer, the daughter of Carl and Marie (Dorweiler) Schafer was born September 11, 1948 in West Bend, Iowa where she was raised and received her education, graduating from the West Bend High School in 1966. She then attended La James College of Hairstyling in Mason City. On September 11, 1970 she was united in marriage with David Welter at the Little Brown Church in Nashua, IA. The couple lived and farmed the majority of their married lives in the Ottosen area. Janet is survived by her husband David of Ottosen, IA, children, Jesse (Shawn) Welter of Ottosen, IA and their children Kayla, Cassidy, Alexis and Ryker, Jillian (James) Hansen of West Bend, IA and their children Tyler and Cooper, and Justin(Allison) Welter of Ames, IA and their daughter Emma, mother in law, Alice Welter of Ottosen, IA, siblings: Francis (Nancy) Schafer of West Bend, IA, Karla (Clarence) Hanson of Graettinger, IA, Pat Keeble of West Bend, IA, Dorothy Struthers of Ankeny, IA, Linda Konken of West Bend, IA, Anna (David) Schwint of Storm Lake, Iowa, Theresa(Dean)McKee of Sioux City, IA, and brother in law Terry Struecker of West Bend, IA. Janet was a devoted mother, had a special love for her grandchildren and loved gardening and baking. She was preceded in death by her parents and her sister Marjorie. The family respectfully requests memorials in lieu of flowers. www.harrisfuneralservices.com

The family of Janet M. Welter created this Life Tributes page to make it easy to share your memories.

Send flowers to the Welter family.