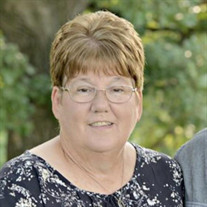 Janie Scrauth, age 69, of Lu Verne, passed away on December 14, 2020 at the Kossuth Regional Health Center, with her husband and daughter beside her. Services for Janie will be held at a later date. The Lentz Funeral Home in Algona is serving the family. Memorials may be made in Janie's memory and directed to the Kossuth County Cancer Support Foundation. Janie Dawn Hurlburt, the daughter of Ralph and Rozella (Fox) Hurlburt, was born on June 19, 1951 in Estherville, Iowa. She graduated from Swea City High School in 1968. Janie was united in marriage with Dennis Schrauth on December 14, 1968 at St. John’s Catholic Church in Bancroft. Janie and Dennis owned and operated Schrauth Flooring & Windows. They started in 1990 in Ringsted, moved their business to Bancroft and retired in 2017. Janie was a licensed and was a mentor as a Bee Keeper in Iowa. She was also a Master Gardner and enjoyed selling honey, vegetables and flowers at the Farmers Market. Janie volunteered, donated and fundraised for Relay For Life and the Kossuth County Cancer Support Foundation. In her spare time, Janie enjoyed baking goods and meals for family and friends, traveling with Dennis and play cards and games with friends. Left to cherish Janie’s memory is her husband of 52 years, Dennis; children, Dawn (Jon) Zwiefel of Titonka and Darrin Schrauth of Myrtle Beach, SC; 3 grandchildren, Dorey King, Keagan Zwiefel and Lakeisha (Derek) Haugland; 2 great grandkids, Asher and Berkleigh Haugland; brothers, Ralph (Skip) Hurlburt of Midway, GA, Russell (Bonnie) Cox of Montezuma, Randy (Connie) Hurlburt of Algona, Gary (Patti) Hurlburt of Elkhorn, Tom (Julie) Hurlburt of Nevis, MN, Tim (Vicki) Hurlburt of LaPorte, MN and Scott Hurlburt of Park Rapids, MN; and sisters, Susan (Greg) Schultz of Woodbine, Lori (Frank) Antognazzi of Platte City, MO and Amy Bethel of Fergus Falls, MN. She was preceded in death by her parents; a sister, Diane Hurlburt; daughter-in-law, Karen Schrauth; son-in-law, Larry King; mother & father-in-law, Paul and Marie Schrauth; brother-in-law’s, Kenny & Mike Schrauth; and nephews, Nate Hurlburt and Kolin Bethel. The girl who seemed unbreakable, broke. She dropped the fake smile and whispered, “Jesus, I can’t do this anymore.” And He replied, “Daughter, I never wanted you to, I’ve been waiting for you to let Me carry you.”

Janie Scrauth, age 69, of Lu Verne, passed away on December 14, 2020 at the Kossuth Regional Health Center, with her husband and daughter beside her. Services for Janie will be held at a later date. The Lentz Funeral Home in Algona is... View Obituary & Service Information

The family of Janie Schrauth created this Life Tributes page to make it easy to share your memories.

Send flowers to the Schrauth family.