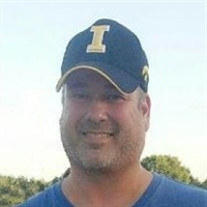 Jason Edward Wickman was born to Larry and Marvella Wickman on October 7th, 1974 the 5th child of 7. He spent his childhood being raised on the family farm south of Mallard. Jason attended school in Mallard and West Bend, graduating in 1993. Wicky, as he was known to his many friends, was a star player on the high school football team. He also filled his days by spending time with his large family and even larger circle of friends; always seeming to get into some sort of mischief with those friends. After high school, Jason continued his education at Iowa Lakes Community College in the Farm Management program. This education would serve him well throughout the rest of his life. He would go on to work various agricultural related jobs that would see him employed as a farm hand for a local farmer, and then into the world of Swine production, first working for Heartland Pork as a chore hand. From there he moved to Christianson Farms as a grow/finish supervisor, and then on to Kerber Company, where he had been employed for the last 12 years. On April 20th 2010 Jason's family circle expanded with the birth of his first child, Lillian Lou. He was blessed again with the birth of his second daughter Charlotte Mae on November 18th 2012. Jason loved being a daddy to his girls, spending countless hours with them. They spent many of their days riding horses or bikes around the farm, spending time swimming at the lake at Grandma and Grandpa Wickman's or just hanging out on the couch at home watching a movie or reading a book. Jason loved the country life, where he lived on a farm outside of West Bend. He raised hogs as a contract grower for Christianson Farms and Smithfield foods. He also had a cow/calf herd with his brother and kept horses. He spent many good days on the farm, riding the horses or ATVs around his property in the summertime. He was an avid snowmobile rider in the winter, taking trips out of state with friends and also hitting the local trails when there was enough snow. He also spent many days out in the tall grass or the river timber hunting deer from his deer blind or birds with his trusty hunting dogs and his incredibly large circle of friends. Wicky was known by many and loved by all. Even in the hardest of times, he always had a smile on his face and seemed to not have a care in the world. Jason passed away June 26th 2019 at the age of 44. Left to cherish his memory are his beloved daughters, Lilly and Charlie, his parents Larry and Marvella, his siblings Julie (Nick),Jerry (Lori), Jill (Peter), Jeff (Jessica), Joni (Patrick), Jamie (Kari), his very special friend and companion Wendy, numerous nieces and nephews, aunts, uncles, cousins and friends. He is preceded in death by his grandparents Edward and Helen Zaugg and Ralph and Bertha Wickman.

Jason Edward Wickman was born to Larry and Marvella Wickman on October 7th, 1974 the 5th child of 7. He spent his childhood being raised on the family farm south of Mallard. Jason attended school in Mallard and West Bend, graduating in 1993.... View Obituary & Service Information

The family of Jason E. Wickman created this Life Tributes page to make it easy to share your memories.

Jason Edward Wickman was born to Larry and Marvella Wickman on...

Send flowers to the Wickman family.