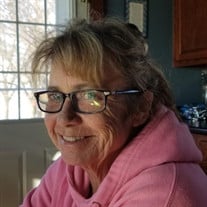 Jayne Hoover, age 65, of Mallard, passed away on September 22, 2021, at the Pocahontas Community Hospital in Pocahontas. Memorial services will be 10:30 am on Monday at the Harris Funeral Home in Mallard. Visitation will be 9:30 am until service time on Monday. Services will be live streamed on the Lentz Funeral Home Facebook page https://www.facebook.com/Lentz-Funeral-Home-122511234501273 Jayne Marie (Lynch) Hoover, the daughter of Robert and Marian (Herron) Lynch, was born on January 13, 1956, in Storm Lake, Iowa. She grew up on the family farm northwest of Varina. She graduated from Albert City-Trusdale High School in 1974. On July 31, 1976, Jayne was united in marriage with Tom Hoover at St. Columbkille Catholic Church in Varina. Jayne worked at home farming, raising purebred hogs, and raising her children. Next she worked at Ron’s Tap in Mallard, and then Sears in Spencer. She retired in 2008, after she was diagnosed with breast cancer. She remained cancer-free for 14 years. In November of 2020 she was diagnosed with lung and liver cancer. She bravely fought the cancer until Wednesday morning. Jayne was a long-time member of the St. Mary's Catholic Church and Ladies Circle, Spring Hills Country Club, and the Triboji Beach Betterment Association. She enjoyed fishing, golfing, and watching the Twins and Cyclones. Jayne loved attending her grandchildren’s events and wintering in Lake Havasu City. She was an outstanding cook, a great entertainer, and her holiday meals were large enough to feed a small army. Nothing made her happier than being surrounded by her family with food in the oven and drinks on the table. Left to cherish Jayne’s memory is her husband of 45 years, Tom; her children, Tami (Zac) Treiber of Mallard and Mick (Lindsay) Hoover of Pocahontas; her grandchildren, Logan and Paizlea Treiber; and Lauren, Ali, and Kale Hoover; a brother, Brian (Janeane) Lynch of Clive; many nieces and nephews; in-laws, special friends, Charlie & Diane and the rest of the lake family; the college gang; as well as many other dear and lifelong friends. She was preceded in death by her parents; brothers, Mark and Robert Lynch; in-laws, Donald and Betty Hoover; and a nephew, Brian Hoover. Memorials may be made in Jayne’s name and directed to the Triboji Beach Betterment Association.

Jayne Hoover, age 65, of Mallard, passed away on September 22, 2021, at the Pocahontas Community Hospital in Pocahontas. Memorial services will be 10:30 am on Monday at the Harris Funeral Home in Mallard. Visitation will be 9:30 am until... View Obituary & Service Information

The family of Jayne Hoover created this Life Tributes page to make it easy to share your memories.

Send flowers to the Hoover family.