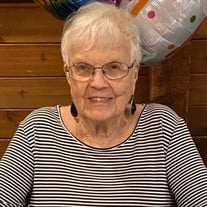 Jean Madalyn (Mickelson) Swearingen passed away at age 99 on April 3rd, 2022 in West St. Paul, MN, surrounded by her loving family. The Lentz Funeral Home in Humboldt is handling funeral arrangements for the family. Visitation will be held at the Congregational UCC, 111 Taft Street N, Humboldt, Iowa at 10:00am on Monday, April 18th, followed by the memorial service at 11:00am. A private burial will take place at Oakland Cemetery in Sac City, Iowa, where Madalyn will be laid to rest beside her husband. Military Honors conducted by the United States Navy Honor Guard. Services will be live streamed on Lentz Funeral Homes Website: https://www.hdezwebcast.com/show/madalyn-jean-swearingen Madalyn, the daughter of Thomas and Catherine (Olesen) Mickelson, was born on August 3rd, 1922 on the family farm in Rutland, Iowa. She was educated in the Humboldt Community Schools, graduating high school in the class of 1940. Madalyn attended Drake University where she was a member kappa kappa Gamma sorority and taught elementary school in Primghar and Clarion, Iowa before enlisting as a WAVE in the United States Navy in 1944, proudly serving her country. Madalyn married William Joseph Swearingen of Sac City, Iowa, a Navy pilot she had met at Drake, in March of 1945, while both were serving in Seattle, Washington. Following their service, they returned to Drake, where they graduated in 1947. Several years later, after moving to the Chicago area, Madalyn and Bill were blessed with son Tom and daughter Carol. Sadly, Bill passed away suddenly days before Carol was born, after which Madalyn and the children moved back to Humboldt, Iowa. Education was always very important to Madalyn. As her children grew older, she resumed her teaching career. She taught kindergarten in Livermore for 20 years, retiring in 1985. Madalyn was a wonderful teacher, delighting in and remembering her many students throughout the years. The Congregational United Church of Christ in Humboldt was Madalyn’s home church, where she served on committees, taught Sunday School, attended Bible studies, and enjoyed many deep friendships. An avid reader throughout her life, Madalyn was a devoted patron of the Humboldt Public Library, serving on their board. In addition to reading, Madalyn was a life-long bridge player, enjoyed keeping up with world events, traveled to many parts of the world, and was a gracious hostess to her many friends and family members. Always young at heart, she delivered Meals on Wheels to the “old people” when she was well into her 80’s! Madalyn is survived by her children Tom (Peggy) Swearingen of Cary, NC and Carol (Mike) Kaup of Lake Elmo, MN as well as her five grandchildren: Katie Swearingen, Molly (David) Shadpour, Will (Jess) Swearingen, Allison Book, and Emily (Andrew) Aeshliman. Also surviving are her six great-grandchildren: Judah, Dov, Ben, and Esther Shadpour and Elle and Logan Swearingen, and many close nieces and nephews. Preceding her in death was her husband, her parents, her sister Marjorie (Stanley) Lee, her brother Roger (Pat) Mickelson, and special cousin Jeanie Foster. Madalyn loved her family and friends dearly, always inquiring about and interested in the details of their lives. Her positive outlook, cheerful disposition, and ready laugh remained with her even as her memory began to fade. She sought to bless, always putting others’ needs above her own. Madalyn exemplified the Proverbs 31 woman: she was full of strength, dignity, and wisdom, and she feared the Lord. Her loved ones thank God for her and rejoice that she is at peace in Heaven with her Lord and Savior Jesus Christ. In lieu of flowers, memorial gifts may be given in Madalyn’s name to the Humboldt Public Library.

Jean Madalyn (Mickelson) Swearingen passed away at age 99 on April 3rd, 2022 in West St. Paul, MN, surrounded by her loving family. The Lentz Funeral Home in Humboldt is handling funeral arrangements for the family. Visitation will be held at... View Obituary & Service Information

The family of Jean "Madalyn" Swearingen created this Life Tributes page to make it easy to share your memories.

Jean Madalyn (Mickelson) Swearingen passed away at age 99 on...

Send flowers to the Swearingen family.