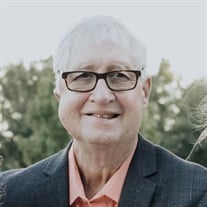 Jerry Ehrhardt, age 66 of Humboldt, passed away Sunday, April 18, 2021 at Trinity Regional Medical Center in Fort Dodge. Celebration of Life will be held on Thursday, April 22, 2021 at 11:00 AM at Zion Lutheran Church in Humboldt. Visitation will be held on Thursday from 9:30 AM until the time of the service at Zion Lutheran Church in Humboldt. Masks are recommended. Jerry Edward Ehrhardt, the son of Edward Joseph and Norma (Himrod) Ehrhardt, was born on May 9, 1954 in Humboldt, Iowa. He graduated from Brenham High School in Texas. On January 15, 1976 he married Shelly Smith and they raised their two children (Mandy and Joe) in Dakota City, IA. Throughout their marriage they lived in Iowa, Texas and Florida. Jerry worked as salesman and wagon master for Born Free Motorcoach in Humboldt. He and Shelly relocated to Florida in 2006 to help with the Born Free Sales lot until they relocated to Texas on 2011 to be near his grandchildren. Jerry loved to play golf, hunt with the guys and cheer on his beloved Pittsburgh Steelers. He was known to enjoy a black velvet or two on his patio while entertaining friends with one of his many stories! His greatest joy was his grandkids. Every Monday night, they would have sleepovers and play games or just lay in bed watching the Golden Girls. Jerry is survived by a daughter, Mandy (Sam) Gambarin, Pflugerville, TX; a son, Joseph Ehrhardt, Des Moines; grandchildren, Bailey, Mazie and Payton Geitzenauer, Pflugerville, TX, Ruby and Wyatt Ehrhardt, Des Moines; sisters, Janice Limerick, College Station, TX, Judy (Tom) Turbiville, College Station, TX; father and mother-in-law: Tod and Letha Smith, Dakota City; brothers-in-law, Dennis (Vicky) Smith, Dakota City, Rick Smith, Dakota City, Tom Smith, Barnum, Larry (Linda) Smith, Pleasant Hill; a sister-in-law, Cathy Gaydos, Phoenix, AZ; and numerous nieces and nephews. He was proceeded in death by his wife Shelly; parents, Ed and Norma Ehrhardt and sisters, Jean Vought and Jill Lens.

Jerry Ehrhardt, age 66 of Humboldt, passed away Sunday, April 18, 2021 at Trinity Regional Medical Center in Fort Dodge. Celebration of Life will be held on Thursday, April 22, 2021 at 11:00 AM at Zion Lutheran Church in Humboldt. Visitation... View Obituary & Service Information

The family of Jerry Ehrhardt created this Life Tributes page to make it easy to share your memories.

Send flowers to the Ehrhardt family.