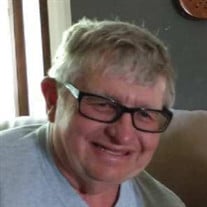 Jimmie Halsrud, age 74, of Livermore, passed away Sunday, April 3, 2022 at his home. Funeral services will be 2:00 PM on Friday, April 8th at Faith United Methodist Church in Livermore. Military Rites will be conducted by the U.S Air Force and the Otto-Field American Legion Post # 415 of Livermore. Visitation will be 4 – 7 PM Thursday at Faith United Methodist Church in Livermore. Jimmie Merle Halsrud, the son of Alvin Merle and Elma (Smith) Halsrud, was born on August 21, 1947 in Fort Dodge, Iowa. He graduated from Twin Rivers High School in 1965. Jimmie served his country in the U.S. Air Force as a mechanic on a B52 bomber during the Vietnam War. He then attended Lincoln Tech in Des Moines for mechanic training. On December 10, 1970 Jimmie was united in marriage with Cathy Jo Klass at the Methodist Church in Bradgate. They farmed and raised cattle and their family near Livermore. Jimmie loved being a farmer and was still actively farming. He enjoyed telling stories and making people happy. Jimmie always thought of others and would spend a lot of time on the phone talking to people and checking in with his family. He collected vehicles, toy tractors, and liked watching Westerns. Most of all, Jimmie loved his children and grandchildren and attending their activities, if it didn’t interfere with farming. Left to cherish Jimmie’s memory is his wife of 51 years, Cathy; children, Tammy (Travis) McKimmey of Gilmore City, Jason (Lacy) Halsrud of LuVerne and Joseph (Kayla) Halsrud of Dayton; 12 grandchildren, Tyler (Kennedy), Taylor (Ian Joyce), Tanner and Taryn McKimmey, Tyson, Kennedy, Carson, Montgomery, Jaxson and RaeLynn Halsrud; 1 great grandchild on the way; his mother, Elma Halsrud of Humboldt; a brother, Gary Halsrud of Rutland; and a sister, Judy (Ken) Hoodjer of Clarksville. He was preceded in death by his father, infant sons, Jessie and Jeffery Halsrud; and a sister-in-law, Carole Halsrud.

Jimmie Halsrud, age 74, of Livermore, passed away Sunday, April 3, 2022 at his home. Funeral services will be 2:00 PM on Friday, April 8th at Faith United Methodist Church in Livermore. Military Rites will be conducted by the U.S Air Force... View Obituary & Service Information

The family of Jimmie Halsrud created this Life Tributes page to make it easy to share your memories.

Send flowers to the Halsrud family.