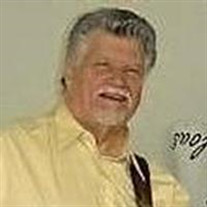 Jimmy Jay Frieden was born May 25, 1940 in Lamar, Missouri to Miriam (Banwart) Frieden of West Bend, Iowa and Ray Frieden of Lamar. He passed away in Marshalltown, Iowa, exactly 76 years later on the morning of his birthday. After living briefly in Lamar, and then Elgin, Illinois, the young Frieden family moved to a farm near Ottosen where they remained for nearly 30 years. The boy known as Jay to family and friends in the West Bend and Lamar areas, and as Jimmy elsewhere, attended Ottosen public school through 10th grade when the small school was closed. He completed his education in West Bend, graduating from West Bend High in 1958. In 1960 he joined the Air Force and was stationed for four years in Chateauroux, France. Upon leaving the military service, he began his career as a professional musician, sparked by the early success of the Sonics, his band made up entirely of young men from West Bend. His passion for all types of music led him to Cleveland, and then to Boston where he met and married Patricia Sico of Revere, Massachusetts. They had two sons, Jimmy Jay, 49 and Jaron, 46. Jimmy played guitar and bass with top bands throughout New England, and later in South Florida, before retiring and returning to his roots in the West Bend area. As a resident of Ruthven in recent years, he greatly enjoyed playing music with friends Jim Schmidt and Martin Zaugg. As "The West Benders", the trio played for appreciative patients in nursing homes, care centers, and for local charities. As his health failed in recent years, Jay moved to the Iowa Veterans Home in Marshalltown, where he died peacefully surrounded by family members, friends and fellow veterans. Jay is survived by his two sons Jimmy Jay of Waltham, Massachusetts and Jaron and his wife Noel of Burlington, Massachusetts. and five grandchildren: Jack, Cole, Kailey, Aria and Anya, all of Massachusetts; one brother Terry Frieden and his wife Nora, nephew Thomas and niece Kathryn, all of Alexandria, Virginia; and one sister Nancy Pedersen (Patrick Farrell) of Ankeny, Iowa, and niece Anna Pedersen of Saint Paul, Minnesota. Other survivors include six aunts and uncles and nearly 70 Banwart and Frieden first cousins. Jay was the oldest of Paul and Elizabeth Banwart's 46 grandchildren, of whom 44 survive. Jay was preceded in death by his father Ray in 1969 and his mother Miriam in 2009.

Jimmy Jay Frieden was born May 25, 1940 in Lamar, Missouri to Miriam (Banwart) Frieden of West Bend, Iowa and Ray Frieden of Lamar. He passed away in Marshalltown, Iowa, exactly 76 years later on the morning of his birthday. After living briefly... View Obituary & Service Information

The family of Jimmy Jay Frieden created this Life Tributes page to make it easy to share your memories.