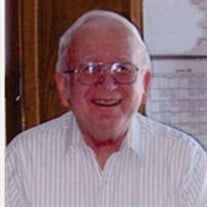 Mallard....John Robert Donahue, 83 of Mallard died Wednesday March 15, 2017 at North Iowa Mercy Medical Center, Mason City, IA. Services will be held Monday, 10:30 AM at St. Mary's Catholic Church, Mallard with burial to follow in the church cemetery. Visitation is from 2-5 PM Sunday at the church in Mallard where a Vigil service will be held at 5:00 PM. John "Jack" Donahue, the son of John C. and Beatrice Mae (Johnson) Donahue was born November 1, 1933 in Racine, WI. He graduated from Mattoon High School in Mattoon, IL, in 1952 and from the University of Illinois in 1956. From 1956-1958, he served in the Army at the Pentagon’s Machine Records Unit. On July 24, 1958 he was united in marriage with Guinevere “Gwen” Ruppert at St. Mary's Catholic Church in Mallard. Jack was employed by Sears and Roebuck as an operations specialist and comptroller. The family moved to Mallard in 1973, where Jack farmed for many years. He also owned and operated Donahue Bookkeeping and Tax Service during this time. Survivors include his wife Gwen of Mallard, IA, daughters: Deborah (Mark) Garrett of Harlan, IA, Kathleen (Don) Hatfield of Broken Arrow, OK, and Janet (Tom) Nugent of Dallas Center, IA, grandchildren: Brittany (Matt) Holmes, Brandon Hatfield, Krista, Lisa and Laura Garrett, great grandchildren: Liam and Owen Holmes, as well as many nieces and nephews. He was preceded in death by his parents, and brothers-in-law Roumain Ruppert and Francis Ruppert. Jack enjoyed playing bridge and pinochle. He and Gwen loved traveling and visited all 50 states. He was a long-time member of St. Mary's Catholic Church. He was proud to be a member of The Sons of the American Revolution. He enjoyed model railroading, World War II history and was passionate about genealogy. He loved spending time with his grandchildren and was full of pride when talking about their achievements. www.harrisfuneralservices.com

The family of John Robert Donahue created this Life Tributes page to make it easy to share your memories.

Send flowers to the Donahue family.