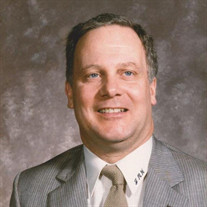 John Hood, age 81 of Algona, passed away on Wednesday, March 10, 2021. Mass of Christian Burial will be held on Saturday, March 20, 2021, at 11:00 a.m. at St. Cecelia Catholic Church in Algona. Services will be livestreamed, please go to https://youtu.be/ZKVzNqbgEjc in order to view it live. Immediately following Mass, burial will be at Calvary Cemetery. Visitation will be held on Friday, March 19 from 4:00 p.m. to 7:00 p.m. at Lentz Funeral Home in Algona. Face masks are required at all events. John Michael Hood, the son and only child of William “Bill” and Arlene (Haynes) Hood, was born on January 10, 1940, in Fort Dodge, Iowa. He graduated high school from St. Cecelia’s Academy in 1958. Following graduation, John attended the University of Notre Dame, and became a proud graduate in 1962. Upon his graduation from college, John returned to Algona to own, operate, and manage Hood’s Grocery Store. Shortly after, John married Elaine (Auld) in November of 1962, and they were married for nearly 30 years. In March of 1963, John enlisted in the National Guard. For basic training, he spent eight weeks at Fort Leonard Wood in Missouri and four months at Fort Sill near Lawton, Oklahoma. He was honorably discharged after six years of service. John and Elaine welcomed the first of their five children in 1964, and he became a proud father and family man. From horse shows to baseball games, John was always there to support his children in all of their endeavors. Following the arrival of his first of eight grandchildren in 1988, his life became even more full with opportunities for John to share his love of baseball, bird watching, and of course, The Fighting Irish. John’s family was the most important thing in his life, and spending time with his children and their families brought him great joy. He was always there to lend a hand, an ear, or send a handwritten letter composed on one of his yellow legal pads. John delighted in showing love for his family. A grocery man through and through, he spent his entire professional career running Hood’s Grocery Store, which his parents opened in Algona in 1937. The grocery store was a staple of Kossuth County business for more than 62 years, and over the years the store supported countless local initiatives and received many awards and accolades, including a 50-year award from Super Valu. He also opened a Hood’s Grocery Store in Estherville. John loved all aspects of the store, from keeping his father’s tradition of ensuring the produce was a signature department, to pricing merchandise, to having a spotless store with a gleaming floor, to chatting with customers and getting to know everyone--whether new or longstanding--in the community. Anyone whom John met knew his love of Notre Dame. Rather than say hello when he answered his phone, he said “Go Irish,” and he jumped at every chance to get back to South Bend for a KC Hall steak sandwich, a football game, and a trip to Rocco’s Pizza, where he could reminisce about his college days with the family owners. When he was home, there wasn’t a televised Notre Dame sporting event that he missed. He passed on his love of Notre Dame to his family, with two children becoming alumni, and a grandchild currently enrolled. In more recent years, his loyal companion was his dog, Boo Bear. They loved to have breakfast together, and could often be spotted driving around town in their pickup, taking walks, or out on the golf course. The two loved to watch Notre Dame and Chicago Cubs games together, and she was even by his side, along with his granddaughter, when John was the Grand Marshal of the Algona St. Patrick’s Day Parade in 2011. His love of sports brought him to many Bishop Garrigan and Algona games over the years, and he was a big supporter of local schools and teams. Passionate about both playing and watching baseball, John enjoyed cheering for the Chicago Cubs. John was an avid fan, and he loved to share stories of his days playing baseball in school and at Notre Dame. Throughout his life, John never met a stranger. He loved striking up conversations with everyone, and was always interested in hearing about other peoples’ stories and connecting the dots to how their lives may have intersected. His witty sense of humor provided laughs for all he spoke with, and John’s keen intellect provided meaningful and memorable interactions. He was truly one of a kind. As a lifelong Catholic, John’s deep faith guided him throughout his life. He was a Fourth Degree member of the Knights of Columbus, a former president of the Algona Rotary Club, loved to play golf, was hard to beat at cards, enjoyed being a pilot and a member of a local flying club, and even challenged himself by running the Twin Cities Marathon. John brought his “Fighting Irish” spirit to everything in his life, including his courageous final battle. He was supported by family and close friends through it all, and he inspired them through his resilience. He departed this world on March 10, and was greeted in heaven by his loved ones that preceded him, including his parents, and his beloved companion, Boo Bear. His family will miss him dearly, but are comforted knowing he is at peace in the loving arms of God. John is survived by his five children: Cheryl (Joseph) Hood Langel of Lakeville, MN, John (Ally Klee) Hood Jr. of Algona, Lisette (Cory) Wiltse of Algona, Krista (John) Richardson of Minneapolis, MN, and B. J. (Rachael) Hood of Minneapolis, MN; 8 grandchildren: Katy (Tim) Hawkins, Nicole Bosworth, Benjamin and Abigail Langel, Samantha Hood, and Sadie, Grace, and William Richardson; great-granddaughter Emery Hawkins; former wife Elaine Hood, former wife Toni Warnock; and many dear relatives

John Hood, age 81 of Algona, passed away on Wednesday, March 10, 2021. Mass of Christian Burial will be held on Saturday, March 20, 2021, at 11:00 a.m. at St. Cecelia Catholic Church in Algona. Services will be livestreamed, please go to https://youtu.be/ZKVzNqbgEjc... View Obituary & Service Information

The family of John Hood created this Life Tributes page to make it easy to share your memories.

John Hood, age 81 of Algona, passed away on Wednesday, March...

Send flowers to the Hood family.