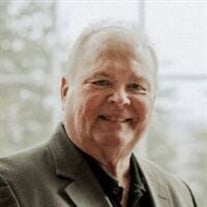 John Bernard Mertz III was born on May 11, 1950 to Mary Helen (Greener) Mertz and Jack Mertz of West Bend, Iowa.  John grew up in West Bend, attending Sts. Peter and Paul Catholic School, Bishop Garrigan High School and ending his education at Loras College in Dubuque.  John met the love of his life while attending Loras College, always sure to tell everyone he knew that Linda had the best set of legs and he had to ask her out on a date.  John and Linda (Walker) Mertz were united in marriage on July 19, 1975 in Scranton, Iowa.  Their union produced five wonderful children: Blake (Amanda) Mertz of Morgantown, WV, Jamie (Angela) Mertz of Indianola, IA, Kate (Paul) Avenarius of Dubuque, IA, Beth (TJ) Greiner of Des Moines, IA and Meg (Jason) Lastovica of Ankeny, IA.   John began his career for John Deere after he graduated from Loras College.  He made his way back to West Bend to work for J.B. Mertz & Son, Inc. and his father, Jack.  John loved the color green and anything John Deere, often sparring with his father-in-law over the importance of purchasing the green tractor over the red one.  John took ownership of J.B. Mertz & Son, Inc. in 2011 and celebrated the 100 year anniversary in 2017; this was a very proud moment for John.   John loved to golf, watch the Atlanta Braves and most importantly, laugh.  John’s laugh was contagious and his eyes sparkled in delight with his many jokes and one-liners.  John loved Linda with all that he had and their marriage was one that we all hoped to have one day.  Their 45 years together were spent raising their loud and crazy brood of kids, trying to keep up with the grandkids, traveling and enjoying the life they built together.    John contracted Covid-19 in early January 2021.  He fought a hard battle and ultimately lost this battle on January 18, 2021.  John’s passing has left us all heartbroken and wishing for one last bear hug, but we know he is in Heaven ruling the golf course up there.  John joins his father, Jack, mother-in-law, Betty Walker, father-in-law, Gene Walker, and brother-in-law, Jim Walker in Heaven.  John’s family wants to thank everyone for their support during this time.  John is survived by his wife, Linda, 5 children and their partners, 13 grandchildren; mother, Mary Helen Mertz, sisters Linda (Dale) Martin, Lisa (Joe) Davenport, and Kara (John) Berg; brothers Jeff Mertz and Pat (Pam) Mertz; sister-in-law Becky (David) Wolf; brothers-in-law Jack Walker and Jerry (Julie) Walker; and many nieces and nephews. During this celebration of John’s life, we can gather together, share memories, laugh and love, just as John would have wanted. Sympathy cards may be sent to: Linda Mertz, 1272 Cherry Ridge Court , Dubuque, IA  52003

The family of John Bernard Mertz III created this Life Tributes page to make it easy to share your memories.