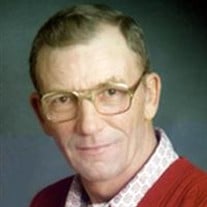 Mallard...John Alan Woodford, 82 of Mallard died Friday July 14, 2017 at the Palo Alto County Hospital in Emmetsburg. Services will be held Wednesday, 10:30 AM at the United Methodist Church, Mallard with burial to follow in Rush Lake Cemetery. Visitation is from 9:00-10:30 AM at the church prior to services. John Alan Woodford, the son of John and Alice (Hoover) Woodford was born March 25, 1935 in Webb, Iowa. He attended school in Webb, Laurens and Mallard, graduating from the Mallard High School in 1953. On June 19, 1955 he was united in marriage with Norma Jean Fisher at the United Methodist Church in Mallard. The couple farmed together near Mallard during their married lives. Alan also owned and operated Mallard Sporting Goods since 1983. Survivors include his children, Debra (Duane) Myer of Curlew and Ken (Dawn) Woodford of Mallard, grandchildren, John (Crystal) Woodford and their children Asher and Archer of Mallard, Cole Woodford of Des Moines, Elizabeth (John) Bohnen of Colorado Springs, CO, Michael(Nicole) Myer and their children Morgan, Wyatt and Tate of Curlew, and Lisa Woodford of Mallard, IA. Alan is also survived by his friend and sidekick "Buddy" who now resides with Jerry Wickman. Preceding him in death were his parents, wife Norma Jean in September of 2016, sons, Steve and Michael Woodford, a sister Arden Cargin and brother Monte Woodford. Alan was a member of the United Methodist Church, where he served as Sunday School teacher and MYF Youth Leader. He was also a boy scout leader, and was a proud member of the Masonic Lodge and the Shriners. He loved participating in the tractor rides in the area and especially loved his hunting trips with his grandchildren. Alan cherished the time spent with his family and friends. www.harrisfuneralservices.com

Mallard...John Alan Woodford, 82 of Mallard died Friday July 14, 2017 at the Palo Alto County Hospital in Emmetsburg. Services will be held Wednesday, 10:30 AM at the United Methodist Church, Mallard with burial to follow in Rush Lake Cemetery.... View Obituary & Service Information

The family of John Alan Woodford created this Life Tributes page to make it easy to share your memories.

Send flowers to the Woodford family.