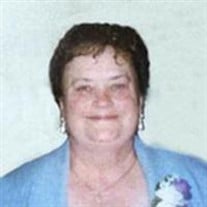 West Bend...Judith (Judy) Ann Gates, daughter of James and Rachel (Mogler) Park, was born February 7, 1942. She moved to West Bend in 1956 and was married December 14, 1958 to Rodger Fehr. To this union 3 sons were born. On December 4, 1976 she married Don Gates of Hardy, IA. Judy helped run the Aloha Café in West Bend and worked at the West Bend Care Center. In her later years, she worked at the Humboldt Dairy Queen and the Humboldt County Home Health Care. Judy was in the Eagles Club, the Ladies Auxiliary VFW, and sang in a choir in Humboldt. She also was in a whistling group that entertained residents in the North and South Care Centers in Humboldt. Judy and Don entered the West Bend Care Center in January of 2010. She attended the Apostolic Christian Church and in 2010 she made a beginning in service to the Lord. Judy died June 29, 2017 at the age of 75. Survivors include her children, Ron (Sandy) Fehr of Lakeside, MT, Bill Fehr of Chandler, AZ, and Don (Susie) Fehr of Des Moines, IA, step-daughter Diane (Randy) Balvin of Brooklyn, IA, grandchildren: Theresa (Mike) DeWilde, Jesse Fehr, Cassandra Fehr, 2 step grandchildren and 2 great grandchildren; brothers George and Alan Park of Davenport, IA, and several nieces and nephews. She was preceded in death by her parents, husband Don, brother Larry and sister Betty, and a granddaughter Brandi.www.harrisfuneralservices.com

The family of Judith Ann Gates created this Life Tributes page to make it easy to share your memories.

Send flowers to the Gates family.