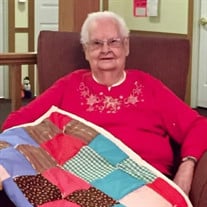 June Hauser, age 94 of Des Moines formerly of Algona, passed away Tuesday, August 10, 2021 at Unity Point-Iowa Methodist Medical Center in Des Moines. A Celebration of Life Visitation will be held on Monday, August 16, 2021 at Lentz Funeral Home in Algona from 4:00 PM until 7:00 PM. Private family graveside services will be held. June Hauser was born in rural Britt, Iowa on June 3, 1927 to Ella Murre and Vincent Fillenwarth. She was a beloved mother and grandmother. As a young woman, she taught school in a one room schoolhouse in Britt for a couple of years, and then worked in the Britt Cafe. She met her future husband, Ralph Hauser at the cafe, and they married on February 12, 1950. The couple relocated to Algona, Iowa, bought a farm, and had four children. June worked in several grocery stores, the S&L Clothing store, and even sold Fuller brushes and Avon. She was well known for her talents as a skilled needleworker and quilter, and displayed her work in the craft store she once owned. She was also very active in the Methodist church quilting group and taught Sunday School. She lived in Algona for most of her adult life, but also managed to travel all over the United States, and made a trip to Europe to see her daughter Julie and her family. She had a keen sense of humor, and a big heart. She dedicated much of her later life to making hats and blankets for babies in Iowa hospitals. June moved to Des Moines in the last decade, and enjoyed visits from her family, as well as her circle of friends. She is survived by her four children: Anthony (Trude) Hauser, Linda (Marvin) Lancaster, Warren, and Julie (Joe) Biver, seven grandchildren, and five great grandchildren. She was preceded in death by her husband Ralph, and two grandsons, Alex and Andrew Hauser. She will continue to be loved and missed by all who know her.

The family of June Hauser created this Life Tributes page to make it easy to share your memories.

Send flowers to the Hauser family.