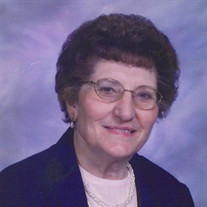 June Reding, age 93, of Algona passed away on March 1, 2022 at the Algona Manor Care Center in Algona. Mass of Christian Burial will be 10:30 AM on Friday at the Divine Mercy Catholic Parish - St. Cecilia in Algona. Burial will take place in St. Joseph Catholic Cemetery in St. Joseph. Visitation will be 4:00 – 7:00 PM Thursday at Lentz Funeral Home in Algona, with a 4:00 PM Catholic Daughters of America Rosary. Services will be live streamed on Divine Mercy Catholic Parish – St. Cecelia’s YouTube page: https://youtu.be/f6x1fT7l5TA. June Adel Arndorfer, the daughter of Michael and Susan (Kellner) Arndorfer, was born on June 16, 1928 on their farm near St. Benedict. She graduated from Corwith High School in 1946. On September 6, 1950 June was united in marriage with Marcell Reding at the St. Benedict Catholic Church. After they married they lived on a farm near St. Benedict and later moved to the family farm near St. Joseph in 1964. After Marcell passed away in 1989, June moved to Algona in 1992. June worked as a checker and Health and Beauty Care Manager at Hy-Vee for 29 years, retiring in 2000. June was a member of St. Cecelia Catholic Church, the Catholic Daughters of America and card clubs. She enjoyed gardening, flowers, volunteering and spending time with her family and attending their activities. Left to cherish June’s memory are her children, Bill (Barb) Reding of Bode, IA, Suzanne Fike of Clarkston, MI, Ron Reding of Davie, FL and Carol (Rick) Krois of Johnston, IA; a daughter-in-law, Deb Reding of Waterloo, IA; 14 grandchildren; 16 great grandchildren; 1 great great grandchild; siblings, Marge Oxley of Blooming Prairie, MN, Arlene Rice of Evanston, IL, Gene (Ramona) Arndorfer of Algona, IA, Mary (Marvin) Tigges of Algona, IA, Bonnie Arndorfer of Emmetsburg, IA, Alice Gramza of Glenview, IL, and a close friend and neighbor, Mike Berte of Algona. She was preceded in death by her parents; husband; a son, Denny Reding; a brother, Thomas Arndorfer; and several brothers-in-law and sisters-in-law. Memorials may be made in June's name and directed to the American Cancer Society.

June Reding, age 93, of Algona passed away on March 1, 2022 at the Algona Manor Care Center in Algona. Mass of Christian Burial will be 10:30 AM on Friday at the Divine Mercy Catholic Parish - St. Cecilia in Algona. Burial will take place... View Obituary & Service Information

The family of June Reding created this Life Tributes page to make it easy to share your memories.

Send flowers to the Reding family.