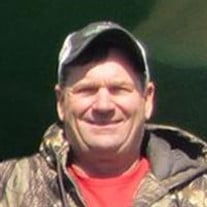 Algona...Keith A. Grimm, 56 of Algona died Friday January 5, 2018 in Mercer, Wisconsin. Services will be held Tuesday, 10:30 AM at Sts. Peter and Paul Catholic Church, West Bend with burial to follow in the West Bend Cemetery. Visitation is from 3-7 PM Monday at the church. Keith Alan Grimm, the son of Clifford and Rosene (Miller) Grimm was born December 20, 1961 in Algona, IA. He was raised in West Bend and graduated from the West Bend High School in 1980. Keith attended Iowa Lakes Community College for two years before he pursued his passion in farming. He was united in marriage with Beth Wagner on September 14, 1985 at Sts. Peter and Paul Catholic Church in West Bend. The couple lived and farmed in the West Bend area during their married lives and raised two children. Early on in life, Keith enjoyed many activities; including motocross riding, snowmobiling, grass-drag racing competitions, and softball league. Later, he enjoyed spending time restoring antique tractors with his father, camping and riding ATV's with his family, and visiting his paradise city, Lake Havasu City, Arizona. He was a huge Minnesota Vikings fan his entire life, making it a priority to attend training camp every year. Most of all, he loved to be with his family, friends, and those who helped him farm. He is survived by his wife, Beth, of Algona, IA, daughter, Wendy Grimm, of Johnston, IA, and son, Brady Grimm of Johnston, IA; brother, Wayne (Rose) Grimm, of West Bend, IA; sisters, Wanda Grimm of Peoria, IL, and Karen (Ken) Schirm, of Stuart, IA; and father-in-law, Eugene Wagner of West Bend, IA. He was preceded in death by his parents, Clifford and Rosene (Miller) Grimm, mother-in-law, Mary Jean (Lundgren) Wagner, and brother-in- law, Randy Wagner. www.harrisfuneralservices.com

Algona...Keith A. Grimm, 56 of Algona died Friday January 5, 2018 in Mercer, Wisconsin. Services will be held Tuesday, 10:30 AM at Sts. Peter and Paul Catholic Church, West Bend with burial to follow in the West Bend Cemetery. Visitation is... View Obituary & Service Information

The family of Keith Alan Grimm created this Life Tributes page to make it easy to share your memories.

Send flowers to the Grimm family.