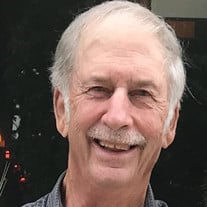 Kenneth Arndorfer, age 76 of Algona, passed away Friday, February 26, 2021. Mass of Christian Burial will be held on Friday, March 5, 2021 at 10:30 AM at St. Joseph's Catholic Church in Wesley. Masks are required. Services will be livestreamed on Lentz Funeral Home's Facebook page https://www.facebook.com/Lentz-Funeral-Home-122511234501273. Burial will take place at St. Benedict Catholic Cemetery. Visitation will be held on Thursday from 4:30 PM until 7:00 PM at Lentz Funeral Home in Algona. Masks are encouraged. Kenneth John Arndorfer “Kenny”, the son of Clarence and Wilma (Arend) Arndorfer, was born on April 15, 1944 in Algona, Iowa. Kenny attended elementary school at St. Benedict and graduated from Garrigan High School in 1963. After graduation, he attended Automotive Trade School in Omaha. Kenny met Dale Metzen on the Fourth of July in Wesley at a Softball game. On May 18, 1974, the couple were united in marriage in St. Benedict. To this union, the couple had four children. He worked as a Service Technician for Thermogas/Farmer’s Coop until his retirement. Kenny enjoyed playing baseball in High School, cheering on his favorite sports teams (Iowa Hawkeyes), farming and gardening. He enjoyed his fishing trips to Canada with his friends. In his free time, he would be often found visiting and helping friends and family. Kenny will be forever remembered for his contagious smile. He was an avid card player, especially cribbage and euchre, and to those who knew him he was a "Euchre Legend." Kenny loved traveling with Dale to go visit their grandkids. He loved to watch his grandkids activities. He made sure to always leave with a hug and a kiss. The family vacations and trips were something he always looked forward to. Left to cherish Kenneth’s memory are his wife of 46 years, Dale of Algona; children, Donna (Shawn) Hereid of Tripoli, Laura (Chad) Bernard of Tripoli, Lisa (Jason) Taffe of Medina, Minnesota and Tim (Tessa) Arndorfer of Overland Park, Kansas; 9 grandchildren, Zach and Jase Hereid, Hannah and Isabel Bernard, Brody, Grayson, Braelynn and Emerson Taffe and Margot Arndorfer; brother, Wayne (Shirley) Arndorfer of Algona and sisters, Mary (Roger) Hayungs of Algona, Connie (Mike) Zodrow of Glendale, Wisconsin, Carolyn Braley of Appleton, Wisconsin, Joyce (Max) Hill of Austin, Texas, Rachael (Jeff) Travis of Redding, California and LuAnn (Frank) Espinoza of Castle Rock, Colorado. He was preceded in death by his parents, Clarence and Wilma Arndorfer and brothers, Randall, Charles and Timothy Arndorfer. In lieu of flowers memorial contributions may be directed to the family for later designation to the Sandra J Schulze American Cancer Society Hope Lodge that is dear to our hearts. The Lentz Funeral Home is serving the family. Condolences may be left at www.lentzfuneralhome.com.

Kenneth Arndorfer, age 76 of Algona, passed away Friday, February 26, 2021. Mass of Christian Burial will be held on Friday, March 5, 2021 at 10:30 AM at St. Joseph's Catholic Church in Wesley. Masks are required. Services will be livestreamed... View Obituary & Service Information

The family of Kenneth Arndorfer created this Life Tributes page to make it easy to share your memories.

Send flowers to the Arndorfer family.