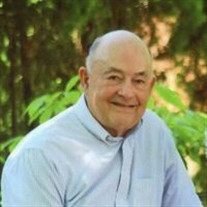 Click here to view/print Funeral Folder West Bend... Kenneth Eugene Banwart, son of Earl and Edna (Keller) Banwart, was born on March 31, 1949 at his childhood home in West Bend. Ken graduated from the West Bend Community High School in 1967. At the age of 21, he began his walk with the Lord. His relationship with his Lord was his most treasured gift. He was a faithful member of the Apostolic Christian Church. In 1971, he started farming in the West Bend area. He was united in marriage to Marlene Metzger on June 16, 1974. In 1991, Butter Braid was started, and the family felt blessed with all the wonderful people God brought into their lives. In 1995, the loss of their son Rick, at the age of 19, was a very difficult time for Ken and the family. After his retirement in 2010 from Country Maid, Ken enjoyed gardening, studying Church history and fishing with his children and grandchildren. Another of his enjoyments in life was playing his guitar. He shared this love of music by teaching guitar lessons to his grandchildren and playing the guitar to residents of area care centers. There is a quote that was said in their home many times, “the best gift any father could give his children is to love their mother.” Ken did that so completely. His other treasures were his children and grandchildren. He had a special bond with each one. Having the grandchildren sitting of his lap telling stories, reading books, and singing songs will forever be imprinted in their memory. He was not a man of many words but was an example to many.   He was preceded in death by his son Rick, parents Earl and Edna, granddaughter Anna, infant sisters Ella and Wilma, father and mother-in-law, Silas and Della Metzger and brother-in-law Don Schambach. He is survived by his wife Marlene, children: Kendra (Ben) Stoller, Latty, OH; LaRae (Jeff) Montag, Twila (Darin) Massner, Wes (Kary), Trent (Hailey) all of West Bend; 22 grandchildren; brothers Eldon (Karen) of West Bend, IA, and Dale (Donna) of Fairbury, IL, and sister LeAnne Schambach of Hampshire, IL

The family of Kenneth Eugene Banwart created this Life Tributes page to make it easy to share your memories.