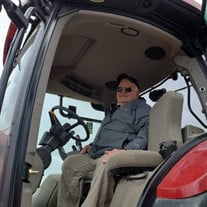 Kim Dreyer, age 66 of Algona, passed away Friday, April 30, 2021 in Algona, IA. Funeral services will be held on Tuesday, May 4, 2021 at 10:30 AM at Trinity Lutheran Church in Algona. Services will be live streamed on Trinity Lutheran Church’s YouTube page. Burial will take place at St. John’s Lutheran Cemetery in Fenton. Visitation will be held on Monday from 5:00 PM until 7:00 PM at Trinity Lutheran Church’s Life Center. Masks are required. Kim James Dreyer, the son of Darrel and Phyllis (Bierstedt) Dreyer, was born on December 27, 1954 in Estherville, Iowa. He attended Fenton Elementary and graduated from Sentral High School in 1973. On November 5, 1976 he met the love of his life, Jane Hoppe, in Fenton. On July 29, 1977, Kim and Jane were united in marriage at St. John’s Lutheran Church in Cushing, Iowa. Kim had a passion, not a career and that was farming. Kim was a servant in the community and his church. He served on the Fenton Co-op and State Line Co-op, the Good Sam’s Board, Sentral School Board, as an Elder for St. John’s Lutheran Church and Trinity Lutheran Church. Kim was a man of few words, but he always showed up. He loved to see the country and he and Jane took many trips with good friends. Kim enjoyed attending his children’s and grandchildren’s activities. His grandchildren were the joy of his life and loved his special tractor and side by side rides with them. Kim is survived by his wife of 43 years, Jane; son, Nathan (Missy) Dreyer of Fenton; daughters, Katie Dreyer of Pella, Marissa (Tony) Hager of Algona and Heidi (Dean) Neubauer of West Des Moines; three grandchildren, Lucas and Lucy Dreyer and Braxton Hager; brothers, Lee (Deb) Dreyer of Fort Dodge and Lynn (Kim) Dreyer of Ames; twin sister, Kay (Al) Luedtke of Algona; uncles, Roger (Marlene) Dreyer of Plano, Texas, Clarence (June) Bierstedt of Sac City and Larry (Janean) Bierstedt of Fenton along with many nieces and nephews and too many friends to mention. He was preceded in death by his grandparents including honorary grandparents, Ed and Leona Meyer; his parents, Darrel and Phyllis Dreyer and mother and father-in-law, Connie and Frank Hoppe. Lentz Funeral Home of Algona is serving the family. Condolences may be left at www.lentzfuneralhome.com

The family of Kim Dreyer created this Life Tributes page to make it easy to share your memories.

Send flowers to the Dreyer family.