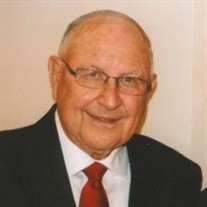 L. Michael Scott, age 86, of Burt, passed away on Wednesday February 16, 2022 at the Kossuth Regional Health Center in Algona. Funeral services will be 11:00 AM on Monday February 21st at the Burt Presbyterian Church, with services live streamed on the Lentz Funeral Homes website. Burial will take place in the East Lawn Cemetery in Algona. Visitation will be 9:30 AM until service time on Monday at the Church. Masks will be required. Louis Michael Scott, the son of Louis W. and Dorothy (Long) Scott, was born on January 9, 1936 on the family farm in Union Township southwest of Burt. Mike attended country school until 9th grade and then graduated from Burt High School in 1953. On August 14, 1960 Mike was united in marriage with Rochelle Andrews. After a nearly 50 year marriage, Rochelle passed away in 2009. Mike then married Sharon (Klooster) Lovstad on November 29, 2014 at the Water’s Edge Nature Center. Mike served in the Iowa National Guard for 4 years and drilled at the Algona Armory. He farmed for 15 years then worked for Farm Bureau Insurance for 5 years. He completed his career working at the Burt Bank for 28 years, serving as Executive Vice President. Mike was a long time member of the Burt Lions Club and also served on the Burt School Board, many of those years as President. Mike had been a member of the Burt United Methodist Church where he served his church on various committees. After the Methodist Church closed Mike joined the Burt Presbyterian Church. Mike and Rochelle enjoyed traveling, having been to all 50 states, Europe three times and the Panama Canal. Mike and Sharon enjoyed many daily rides observing nature and wildlife. In retirement, he always looked forward to spending the winters in Apache Junction, Arizona. Daily coffee with the Burt Coffee Guys was a highlight of his day. You could often find Mike watching westerns or sports and was an avid reader. As a young man, Mike enjoyed playing baseball and softball; later in life he enjoyed visiting family in Montana and fishing trips to Canada. One of Mike’s greatest joys was his grandchildren and he was always so proud of them. Left to cherish Mike’s memory is his devoted wife, Sharon Lovstad; his daughter, Armande (Bill) Fruhling of Madison, WI; his son, Shane (Lisa) Scott of Bolingbrook, IL; four grandchildren, Eric (Mae) Fruhling, Kyle Fruhling, Luke Scott and Nina Scott; step children, Kelly Lovstad of Clear Lake and Kirk (Lori) Lovstad of Ankeny; five step grandchildren, Landon, Bailey, Brooke, Kaedyn and Beckett Lovstad and two sisters-in-law, Mary Andrews of Garner and Pam Wall of Los Angeles, California. He was preceded in death by his parents; wife Rochelle in 2009; a sister, Jean Gifford and three brothers-in-law, Bernard Gifford, JD Andrews and David Wall. In lieu of flowers, the family requests that memorials be made in Mike’s name and directed to the Kossuth County Water’s Edge Nature Center.

L. Michael Scott, age 86, of Burt, passed away on Wednesday February 16, 2022 at the Kossuth Regional Health Center in Algona. Funeral services will be 11:00 AM on Monday February 21st at the Burt Presbyterian Church, with services live... View Obituary & Service Information

The family of L. Michael Scott created this Life Tributes page to make it easy to share your memories.

Send flowers to the Scott family.