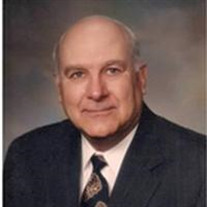 Lannie L. Miller, 78, died peacefully on December 14, 2015 at his home in West Bend. Funeral services will be held at 10:30 am, Friday, December 18, 2015 at Sts. Peter and Paul Catholic Church in West Bend. Visitation will also Sts. Peter and Paul on Thursday, December 17 from 3-7 pm. A prayer service will be held at 7:00. Lannie Lee Miller was born on April 26, 1937 in West Bend, the son of W. Wayne and M. Hazel Bell Miller. He graduated from West Bend High School in 1955. Before graduating, Lannie enlisted in the National Guard. In 1954 he attended NCO School at Fort Riley, KS. He was commissioned as a 2nd Lieutenant at the Iowa Military Academy in 1960. In 1962 he attended the US Army Artillery & Missile School in Fort Sill, OK. He was discharged in 1964. Lannie was united in marriage to Charlene Thul on December 28, 1961 at St. Joseph’s Catholic Church in St. Joe. They farmed near West Bend where Lannie also trucked for Wayne Miller and Sons. Eventually this trucking business became Miller Brothers Trucking which he co-owned with his brother Herb. In 2001, Herb sold his shares to Jeff and Rusty and the business became Miller Freightlines, LLC. Lannie was also a hog buyer for Heinold and IBP from 1985-1994. Lannie was a true believer in service to his community. He served on both the West Bend and West Bend-Mallard school board for over 20 years. He was a Palo Alto County Supervisor for 12 years. Lannie also served on several state level boards including PURE (People United for Rural Education), Iowa State Mental Health and Disabilities Commission, Iowa State Association of Counties Board of Directors, Iowa Hospital Licensing Board, and the Iowa Conservation Reserve Enhancement Program. Lannie was an avid reader of many newspapers and always watched the evening news. He believed it was important to be aware of and care about what was going on in the world. He enjoyed getting into lively debates on nearly any topic imaginable with anyone who was willing to participate. Those left to honor his memory include eight children, Vicki Miller of Mt. Airy, GA, Jeff (Rhonda) Miller of Des Moines, Kris (Randy)Adams of Las Vegas, NV, Tina (Craig) Banwart of Ottosen, Rusty (Rachel) Miller of Clermont, GA, Amy (Bob) Wasson of Waukon, Andi (Adam) Sadler of West Bend and Dixie (Ross) McConnell of Indianola; 22 grandchildren, Abby, Jack, and Anthony Miller, Amanda (Brennan) Kollasch, Casey and Sterling Sprau, Danielle and Andrew Adams, Chelsea (Jordan) Laubenthal, Mackenzie and Cole Banwart, Savannah and Jacob Miller, Regan, Brooke and Mason Wasson, Charli, Ryen, Memphis and Axl Sadler, and Cooper and Collins McConnell. Also surviving are two sisters, Joyce (Bart) Derrick of Ocean View, Delaware and Peggy (Merle) Boomgarden of Algona and one brother Mike “Butch” Miller of Spirit Lake. He was preceded in death by his beloved wife, Charlene on October 29, 2015; his parents, four brothers Herbert, Richard, Bernard, and Dennis and two sisters-in-law Phyllis and Jackie Miller.

The family of Lannie Miller created this Life Tributes page to make it easy to share your memories.