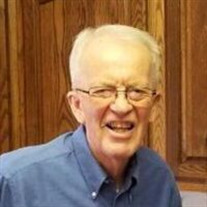 Larry Lynch, 85 of Humboldt, Iowa, formerly of Gilmore City, Iowa, died Wednesday, December 23, 2020, at Paula J. Baber Hospice Home in Fort Dodge, Iowa.  A memorial service for Larry and his wife Esther Lynch, who died March 30, 2021, will be 10:30 am Saturday, June 19, 2021, at Faith United Methodist Church in Gilmore City.  Burial will take place at Marble Valley Cemetery in Gilmore City, followed by a celebration of life at the Lynch family farm in Gilmore City, in honor of the couple, who were married on that date 66 years ago. Larry was born March 14, 1935, the son of Lester and Bernice (Behrendsen) Lynch.  He was raised and educated in Gilmore City where he graduated from high school.  He then attended Iowa State University to study Farm Operations, and graduated in 1955. Larry was united in marriage to Esther Erickson on June 19, 1955 at Our Savior's Lutheran Church in Humboldt, Iowa.  The couple lived and farmed in the Gilmore City area most of their married lives before they moved to Humboldt in 1996.   Larry was a longtime member of the Faith United Methodist Church and a charter member of the Gilmore City Lions Club.  He was also a member of the Masonic Lodge in Gilmore City and served as a trustee of Humboldt County Memorial Hospital.   Survivors include his wife Esther of Humboldt, IA, children:  Robert (Linda) Lynch, Connie Hansen and Susan (Tom) Basten, 9 grandchildren, 3 great grandchildren, brother Barry (Betty) Lynch, and sisters Nancy (Daryl) Granner and Lana Kathy Thomson.  He was preceded in death by his brother John Lynch, parents Bernice and Lester Lynch, son-in-law Stephen Hansen and brother-in-law Ed Thomson. www.harrisfuneralservices.com

The family of Larry Lynch created this Life Tributes page to make it easy to share your memories.

Send flowers to the Lynch family.