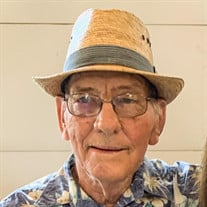 Larry Manus of Burt, passed away peacefully surrounded by his loving family on July 17th, 2021 at the age of 83 at Mercy One North Iowa Hospice in Mason City. Funeral services will be held on Wednesday, July 21, 2021 at 10:30 AM at St. John's Lutheran Church in Burt. Services will be live streamed on St. John's YouTube page https://youtu.be/iNizknQzzLg. Burial will take place at Burt Township Cemetery in Burt. Visitation will be held on Tuesday from 5:00 PM until 7:00 PM at St. John's Lutheran Church in Burt. Lentz Funeral Home of Burt is assisting the family. Larry Eugene Manus was born to George and Lydia Manus on December 10th,1937. He was a lifelong resident of Burt, Iowa. He graduated from Burt High School class of 1956. Larry married Arleen (Ludwig) in 1960 and together they had Lori, Dan, Kurt, and Cindy. They later divorced and Larry married Mayme (Lavrenz) and together welcomed his youngest son, Zac. Larry had an adventurous spirit and was often the life of the party. He was a beloved father, a genuine and loyal friend, always willing to lend a hand when needed. Larry was a proud grandfather who attended every event, program, and birthday party he could make it to. He enjoyed hosting his friends and family at his pool, also known as the “Burt Country Club.” Other favorite pastimes throughout his life included golfing, fishing, hunting, dancing, making his famous jerky, waterskiing at his lake house in Okoboji, and snowmobiling. He was part of the Burt Fire Department and served as chief. Larry was a member of St. John’s Lutheran church in Burt. For many years, Larry owned and operated the K&H gas station in Burt, Iowa. He was then employed by Hormel for 24 years until retiring in 2002. After retirement, Larry enjoyed spending his winter months in Texas. He was preceded in death by his parents George & Lydia Manus, and grand-daughter Jessica Manus. Survived by his loving children, daughter Lori (Mark) Lau of Garner, Iowa; son Dan (Sherry) Manus of Klemme, Iowa; son Kurt (Shazia) Manus of Ankeny, Iowa; daughter Cindy Wingerson of Summit Point, West Virginia; and son Zac (Jeanna) Manus of Ankeny, Iowa; Grandchildren Ben (Cara) Lau, Hannah (Justin) Lau, Renae (Damon) Quandt ; Jordan, Jenna (Andy), and Jamin Manus; Ezra Manus; Baylie and Carter Wingerson; Brecken, Emerson, Gibson, and Walker Manus. Great-Grandchildren Grayson and Nora Quandt. He is also survived by his loving friends of the “Burt Country Club” and fellow Texan snowbirds.

Larry Manus of Burt, passed away peacefully surrounded by his loving family on July 17th, 2021 at the age of 83 at Mercy One North Iowa Hospice in Mason City. Funeral services will be held on Wednesday, July 21, 2021 at 10:30 AM at St.... View Obituary & Service Information

The family of Larry Manus created this Life Tributes page to make it easy to share your memories.

Larry Manus of Burt, passed away peacefully surrounded by his...

Send flowers to the Manus family.