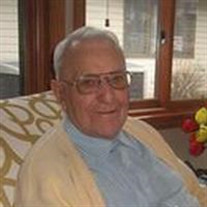 Leonard Edward Leslein, the son of Fred and Minnie (Henniges) Leslein was born January 19, 1920 in a home built in 1918 on the Homestead Farm of 1880 south of Curlew. He lived in this house until he and his wife moved to Emerald Oaks Assisted Living in January, 2010. He received his education at the Rush Lake County School which was located ½ mile south on a small corner of the Homestead Farm. Len attended Curlew High School until the eleventh grade. His older and only sibling, Alfred, went off to the service. Len was left home to help with the farming. Len took over the farm when his parents retired and moved to Spencer, Iowa in 1947. Len met his wife, Mary E. Travis, from Pocahontas, Iowa, at a dance near Havelock, Iowa. They were married May 10, 1941 at a double wedding with Mary's sister, Ruth Travis, and Dale Scott at the Little Brown Church in Nashua, Iowa. Dale was a neighbor and Len's best friend who also farmed a mile away. The two men met the two sisters at dances. They had many years of fun and danced to many top bands. Len was a farmer, avid reader of the Wall Street Journal and many other newspapers. He enjoyed visiting about politics, farming, and travel after he retired. He exercised each day and loved to play golf, tennis, and softball. He loved to engage anyone on any topic of current events, sports, and talk to them about their life. Len and Mary traveled to many parts of the United States. They spent 38+ years in Mesa, Arizona at Venture Out Resort. They loved to meet new people and socialize. No one ever was a stranger. Len was a caring, honest person with integrity. He was the kind of man whose word was his bond. He always put family and friends first. He would tell you that he treasured every moment he lived and every person who helped him along the way in his life. He appreciated the small acts of kindness shown to him and his family. He loved his old and new friends for all the wonderful prayers, deeds and favors along the way. Len was an active member of the United Methodist Church and served on many of their boards. He also helped in the mid-50s and 60s to get night classes available to the public for six weeks at the Mallard High School. Classes such as accounting, sewing, tailoring, welding, woodworking, etc. were offered. He served on many county and local committees as well. Leonard was proceeded in death by his parents, his brother Alfred, and his wife Mary of 72+ years. Leonard is survived by three daughters. Marilyn (David Fehr) of West Bend, Iowa; Connie (Paul) Cassens of Urbandale, Iowa; Joy (Mike) Larson of Orange City, Iowa; seven grandchildren, thirteen great grandchildren, and four great great grandchildren.

Leonard Edward Leslein, the son of Fred and Minnie (Henniges) Leslein was born January 19, 1920 in a home built in 1918 on the Homestead Farm of 1880 south of Curlew. He lived in this house until he and his wife moved to Emerald Oaks Assisted... View Obituary & Service Information

The family of Leonard E Leslein created this Life Tributes page to make it easy to share your memories.

Leonard Edward Leslein, the son of Fred and Minnie (Henniges)...

Send flowers to the Leslein family.