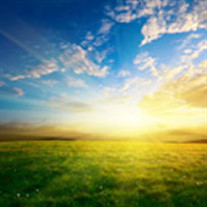 Lettie Martens, 95 of Gilmore City died Tuesday July 28, 2009 at South Care Center in Humboldt. Services will be held Friday July 31, 11:00 AM at Faith Lutheran Church, rural Palmer with burial to follow at Marble Valley Cemetery. Visitation is from 5-7 PM Thursday at the Harris Funeral Home in Gilmore City. Lettie H. Saathoof, daughter of John and Grace (Behrends) Saathoff was born December 31, 1913 in Pocahontas County where she was raised and educated. Lettie was baptized in 1914 and confirmed in 1930 at St. John's Lutheran Church, Lizard Township, Iowa, near Palmer. She was united in marriage with Charlie R. Martens at St.John's Lutheran Church on June 29, 1932. Lettie and Charlie farmed and raised their family in the Gilmore City area during their married lives. Letttie traveled with, and sold tupperware for 44 years. She was widely known, and many times mail would reach her with the simple address of "Lettie-tupperware dealer-Gilmore City, Iowa". She continued working with tupperware upon her retirement, as well as making quilts. Lettie had been a resident of the South Care Center since March of 2008. Lettie served in many offices of the ALCW and as a Sunday school teacher at St. John's Lutheran Church, Lizard Township. She was also a charter member of Faith Lutheran Church, rural Palmer. Lettie and Charlie did many things together such as farming, Tupperware work and quilting projects. Math was always a favorite thing with Lettie and she wished she could be a math teacher. She never used a calculator or adding machine in her business. Lettie was known as a great cook, especially her fried chicken, chicken casseroles, German rye bread, wedding cakes, pies and other baked treats. Lettie was preceded in death by her parents, and her siblings: Wilbert Saathof, Nora Schoon, Ann Truelson, John Saathoff, Edna Behrendsen, and Henrietta Lane, her husband of 71 1/2 years Charlie, and son's in law Dennis W. Shipler and T. Richard(Dick) Brennan.

The family of Lettie Martens created this Life Tributes page to make it easy to share your memories.

Send flowers to the Martens family.