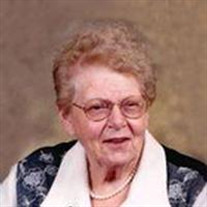 Lois Frances Witcombe, 94 of West Bend died August 14, 2010 at the Palo Alto County Hospital in Emmetsburg. Services will be held Wednesday August 18, 10:30 AM at Peace Lutheran Church, West Bend with burial to follow in Callender Cemetery, Callender, IA. Visitation is from 5-7 Pm Tuesday at the church in West Bend. Lois (Michael) Witcombe, the daughter of Jesse and Estella (Cousins) Michael was born April 28, 1916 in Lucerne, Missouri where she was raised and received her education. She was united in marriage with Lester Calder on March 2, 1943 in Omaha, Nebraska. The couple farmed in Churdan until 1957. They then moved to Moorland for a short while before moving to Callender, IA. Lois worked at (the then) Lutheran Hospital in Fort Dodge as a nurses aid. Mr. Calder died February 6, 1963 and in July of 1967 Lois married Charles Witcome in Gowrie, Ia. The couple spent time in Gowrie and Callender before moving to West Bend in the 1980's. Charles died in October of 1994. Survivors include her children Linda Harms of West Bend, IA, William Calder and Don Calder of Las Vegas, Nevada, 6 grandchildren, seven great grandchildren and one great great grandchild, and a brother Frank Michael of Trenton, Missouri. Lois enjoyed embroidery, crocheting, quilting and gardening, and was a member of Peace Lutheran Church of West Bend. She was preceded in death by her parents, husbands Lester and Charles, son in law Dale Harms, and 11 brothers and sisters.

The family of Lois Frances Witcombe created this Life Tributes page to make it easy to share your memories.

Send flowers to the Witcombe family.