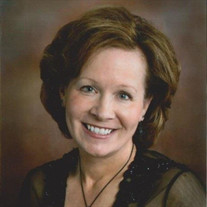 Lorelei "Lori" Koenecke, age 65 of Burt, passed away Monday, August 2, 2021 at the Algona Manor Care Center in Algona. Funeral services will be held on Friday, August 6, 2021 at 10:30 AM at First United Methodist Church in Algona. Burial will take place at Riverview Cemetery in Algona. Visitation will be held on Thursday, August 5, 2021 from 4:00 PM until 7:00 PM at First United Methodist Church in Algona. Lorelei Ann Koenecke, daughter of Edgar and Joyce (Miller) Keith, was born on March 1, 1956 in Mason City, Iowa. Lori attended Burt High School and graduated in 1974 .Representing the Burt High School band, Lori was crowned Queen of the Algona Band Day Festival in 1973. On June 12, 1976, Lori was united into marriage to Alan Koenecke in the Presbyterian Church, Burt, Iowa. Lori was a receptionist for Dr. Schuchert and Dr. Klepper for many years. She also worked at Merle Norman/Grandgenett Fine Jewelry in Algona. In her younger years, Lori was the daycare provider for all the neighborhood children. She loved children, especially babies and earned the title "Baby Hog" from her family. Lori enjoyed being a judge for the Autumn Fest Craft Show for over 20 years. She had a passion for collecting and searching for antiques and crafts. She loved shopping, baking and was known for her frosted sugar cookies and pies. She was an excellent baker and cook, having learned this at an early age growing up on the farm. She lived 60 years of her life on the Keith family farm southeast of Burt. She was proud growing up with three sisters and a brother and liked being known as one of the Keith girls. The Algona Methodist choir benefited from Lori's musical talent, she had a beautiful, clear soprano voice, and sang in the choir for over 35 years. Also known for being the expert decorator of the 15-foot Christmas tree in the church sanctuary each year. God gave Lori a sweet spirit demonstrated by her love for her family, her husband, her children and grandchildren. She now rests in the arms of her Lord and Savior, who made her uniquely beautiful. Left to cherish Lori"s memory are her husband of 45 years , Al of Burt; daughter Kari (Dan) Rusher of Algona; son Michael (Katie) Koenecke of Spencer and their children; Jack, Karson, Claire, and Brooklyn; parents, Edgar and Joyce Keith of Algona; sisters, Chris (Randy) Frideres of Algona, Lynne (Terry) Hoover of Algona, and Merriam (Scott) Lake of Waterloo; brother Brian (Julie) Keith of Des Moines; brothers -in-law Dennis Koenecke of Estherville and Duane (Marlene) Koenecke of Irving, Texas and sister -in law Peggy Nyman of Estherville. She was preceded in death by her grandparents, Wayne and Doris Keith and George and Mildred Miller; father and mother -in-law, Lavern and Helen Koenecke; nephew Jacob Frideres and special friend Carol Spear.

Lorelei "Lori" Koenecke, age 65 of Burt, passed away Monday, August 2, 2021 at the Algona Manor Care Center in Algona. Funeral services will be held on Friday, August 6, 2021 at 10:30 AM at First United Methodist Church in Algona. Burial... View Obituary & Service Information

The family of Lorelei "Lori" Koenecke created this Life Tributes page to make it easy to share your memories.

Send flowers to the Koenecke family.