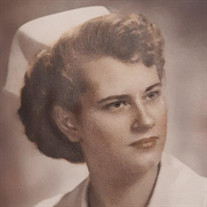 Lorma Elaine (Blank) Zinnel, 95, of West Bend, Iowa, passed away peacefully Tuesday night, October 26th, at the Algona Manor Care Center in the comfort of her family. Funeral services will be at 10:30 AM on Saturday, November 13 at Peace Lutheran Church in West Bend. Burial will take place at the West Bend Cemetery. Visitation will be 9:30 AM until service time at the church on Saturday. Lorma was born on August 28th, 1926, in Morrison, Iowa to Fred and Tabea (Engel) Blank. She was baptized into the Lord's family at their home residence on September 1, 1926. She attended church at Calvary Lutheran in Lester, Iowa, where she was confirmed on April 2, 1939. In 1940, the Blank family relocated to West Bend after her father was offered a job at the train depot. Her adolescent years were spent helping her mother in the house, going to church and, in her spare time playing basketball. After graduating from West Bend High School on May 11, 1943, she moved to Chicago to attend nursing school at Walther Memorial Hospital School of Nursing. After graduating as a registered nurse in May 1947, she moved back to West Bend and started dating the love of her life, Raymond Zinnel. She also worked for a short amount of time as a nurse at the Lutheran Hospital in Fort Dodge. Lorma was united in marriage to Raymond on October 31, 1948, at Peace Lutheran Church. Together, they were blessed with five children; Ray Jr., Bob, Jan, Jon, and Jim. They took ownership of the family farm in 1957, where Lorma spent many years walking beans, helping with chores, and tending house. They continued to farm until 1987. After retirement, Raymond and Lorma joined Laborers for Christ, where they spent 13 years renovating churches and schools around the United States. They took part in their last project in 2002. In 1998, Raymond and Lorma moved from the farm in Whittemore to West Bend. Lorma was a devout Christian who spent her life worshiping the Lord and participated in a variety of religious organizations. She was a faithful member and officer in the Lutheran Women's Missionary League (LWML). She spent countless hours sewing quilts to donate to World Relief and volunteering and donating items to Orphan Grain Train. She was involved in the rejuvenation of the A.A.L. (Thrivent Financial) in which both Raymond and Lorma served as officers. They supported a variety of missionary trips throughout their lives, sang in the church choir, taught Sunday School, and remained active in the church community until late in their years. Other involvements included serving on the American Cancer Society Kossuth Co. Board for nearly 30 years, being a 4-H leader, and a lifetime member of the American Legion Auxiliary. Some of Lorma's favorite activities were attending church, spending time with family and friends, reading, sewing, watching the Cardinals and Hawkeyes, and playing cards. Attending her grandchildrens' events held a special place in her heart. Lorma was a loving and supportive mother and grandmother and she will be missed by many. Survivors include her five children: Ray Jr. (Nora) Zinnel, Bob (Connie) Zinnel, Jan (Mark) Gray, Jon (Beth) Zinnel, and Jim (Andrea) Zinnel;18 grandchildren; 25 great-grandchildren; brother Fred Blank; and several nieces and nephews. Lorma was preceded in death by her loving husband, Raymond; her parents, her sister, Gracka Herzberg; and several brothers-in-law and sisters-in-law. In lieu of flowers, Lorma requested donations be made to auxiliaries of the Lutheran Church Missouri Synod or the American Cancer Society.

Lorma Elaine (Blank) Zinnel, 95, of West Bend, Iowa, passed away peacefully Tuesday night, October 26th, at the Algona Manor Care Center in the comfort of her family. Funeral services will be at 10:30 AM on Saturday, November 13 at Peace Lutheran... View Obituary & Service Information

The family of Lorma Zinnel created this Life Tributes page to make it easy to share your memories.

Send flowers to the Zinnel family.