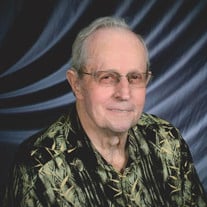 Lowell Campe, age 84 of Algona formerly of Emmetsburg, passed away Tuesday, December 8, 2020 at the Good Samaritan Society in Algona. Private family memorial services will be held on Saturday, December 26, 2020 at 10:30 AM with Rev. Cynthia Finn officiating at Lentz Funeral Home in Algona. Services will be live streamed on Lentz Funeral Home's Facebook page. https://www.facebook.com/Lentz-Funeral-Home-122511234501273 Lowell Ray Campe, the son of Henry and Edith (Thate) Campe, was born on April 25, 1936 on the farm near Granada, Minnesota. He graduated from Granada High School in 1955. On August 24, 1957 Lowell was united in marriage to the love of his life, Shirley Wolter at the St. John’s United Church of Christ in Fairmont, Minnesota. He was a salesman and manager of CFS and FS in Garner and Cylinder. Lowell also was employed by the Cylinder Coop, retiring from StateLine Coop in 2007. He was a member of the Algona United Methodist Church. Lowell enjoyed playing cards, camping, fishing, summer vacations with his family, fixing his cars and repairing anything that was broken. Lowell had a passion for all sports, never missing a Vikings or Twins game. Most of all Lowell loved spending time with his family and friends. Left to cherish Lowell’s memory are his wife of 63 years, Shirley of Algona; his children, Kayra (Warren) Waltman of Algona, Karla Anderson of Waukee and Kevin (Cheryl) Campe of Cherokee; daughter-in-law, Carol Campe of Algona; ten grandchildren and ten great grandchildren. He was preceded in death by his parents; son, Kenneth Campe in 2016; granddaughter Katie Mae Anderson; son-in-law, Keith Anderson; brothers Leonard, Phil and Truman Campe and sisters, Eleanore Wille, Cleo Meschke and Ruby Rudy. In lieu of flowers, memorials may be made in Lowell’s honor and left to the discretion of the family.

Lowell Campe, age 84 of Algona formerly of Emmetsburg, passed away Tuesday, December 8, 2020 at the Good Samaritan Society in Algona. Private family memorial services will be held on Saturday, December 26, 2020 at 10:30 AM with Rev. Cynthia... View Obituary & Service Information

The family of Lowell Campe created this Life Tributes page to make it easy to share your memories.

Send flowers to the Campe family.