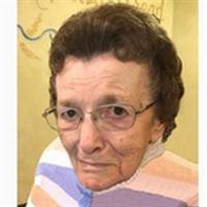 Click here to view/print Funeral Folder Madeline Margaret (Gerber) Banwart, the daughter of Manuel and Minnie (Fehr, Gerber) Bruellman was born on August 1, 1920 in West Bend, IA, 8 months after her father had passed away from Spinal Meningitis. She and her siblings, Eli, Noah and Marie always had a very close relationship and she became known as "Buddy" to her family. Madeline graduated from West Bend High School in 1938 and on December 28, 1938 was united in marriage to Arthur Banwart at the Little Brown Church in Nashua, IA. She and Art farmed together as they raised their 5 children. In August of 1965, she was hired as a bookkeeper at the West Bend Community school and in 1971 became the School Board and Superintendent Secretary and was dedicated to that position for 27 years retiring in 1992. She was known for her precise bookkeeping and record keeping skills. There was never a penny that was not accounted for in a ledger at school or at home; or a receipt that was not re-added for accuracy; even on the last day that she gave up doing her own bookkeeping at the age of 94. Madeline loved her big garden on the farm, it was her “therapy” to work in it after spending the day in school. She enjoyed quilting; making sure each grandchild had a quilt, and was always taking pictures of her children and grandchildren and kept a scrapbook of all their awards, activities and newspaper articles. Madeline became a member of the Apostolic Christian Church on July 28, 2002. Throughout 2002, she lost most of her hearing but kept her “white board” or paper close so people could write to her and she could join in the conversation. In July 2010, just before her 90th birthday, she moved into the Assisted Living in West Bend; moving to the Care Center in May 2015. Madeline is survived by her children: Rich (Marlene) Banwart of West Bend, IA, Ron (Carolyn) Banwart of Sioux Falls, SD (formerly of Fort Dodge, IA), Patricia Banwart of West Bend (currently Hospital Lumiere, Haiti) Mike (Marilyn) Banwart of Emmetsburg, IA, and Dennis (Allene) Banwart of Leawood, KS; 12 grandchildren: Jennifer (Gary) Folkert, Eric (Jen) Banwart, Jody (Adam) Tomjack, Alex Banwart, Stephen Banwart, Melissa Banwart, Michael (Melanie) Banwart, Matthew (Emma) Banwart, Mandy (Mike) Poeppe, Molly (James) Davis, Megan Banwart and Spencer Banwart; 24 great grandchildren and many nieces and nephews. She was preceded in death by her parents, husband Art in 2002, brothers, Eli (Pearl) Gerber, Noah (Emma) Gerber and sister, Marie (Fahey)Gress.

The family of Madeline Margaret Banwart created this Life Tributes page to make it easy to share your memories.