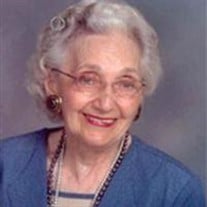 Marguerite L. Montag, 93 of West Bend died Monday April 30, at the Emmetsburg Care Center. Services will be held Thursday, May 3, 10:30 AM at Sts. Peter and Paul's Catholic Church, West Bend with burial to follow in the West Bend Cemetery. Visitation is from 4-7 PM Wednesday at the church where a CDA Rosary will be recited at 4:00 PM and a Parish Vigil Service held at 6:30 PM. Harris Funeral Home of West Bend in charge of arrangements. Marguerite Luella Montag, the daughter of Peter W. and Josephine (Elbert) Dahlhauser was born March 21, 1919 in Whittemore, Iowa, attended and graduated from the West Bend High School. On January 11, 1944 she was united in marriage with Raymond Vincent Montag in West Bend. Marguerite and Ray were lifelong residents farming near Rodman, IA. She was a member of the Catholic Daughters of the Americas. Her Catholic faith was very important to her and she attended daily Mass until she was unable to do so. She left a legacy of this faith which was passed down to her family. She will be remembered for her devotion of the Blessed Mother and the Holy Rosary. Marguerite was an avid gardener and shared her bountiful harvest with her family and friends. Her grandchildren will remember her dill pickles, "Grandma's dessert", homemade bread and cinnamon rolls. She was also the keeper of the family history writing in her daily diary most of her life and preserved the family memories in the annual "Christmas letters". Survivors include her children: Carol (Henry) Bonnstetter of Cylinder, IA, Dorothy (Tim) Schutz of Mallard, IA, Dan(Margaret) Montag of Emmetsburg, IA, Bernadette(Michael) Wise of Emmetsburg, IA, Roger (Theresa) Montag of West Bend, IA, Karen (Patrick) Murphy of Little Rock, AR, and Peter Montag of West Bend, IA, 42 grandchildren, 49 great grandchildren, brothers Art of Hendersonville, TN, Jim of West Bend, IA, Peter of West Bend, IA and Marvin of East Moline, Il, a sister Jodie Stewart of Gilbert, AZ, and sister in law Elizabeth Dahlhauser of Des Moines, IA. Marguerite was an amazing mother, grandmother, great grandmother and most of all a great person. She never complained a day in her life, always had kind words of wisdom to share, and was loved by everyone who knew her. She was an inspiration to be a better person and her family and friends will carry her memory in their hearts. Preceding Marguerite in death were her parents, brothers Paul, Henry and Edward and sisters Agnes (Waechter), Helen (Joynt), Angie (Dearchs), and Marie (Mertz).

The family of Marguerite Luella Montag created this Life Tributes page to make it easy to share your memories.