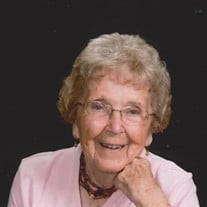 Marie Wilson, age 97, of Livermore, IA, passed away on February 12, 2021, at the Clarion (IA) Wellness & Rehabilitation Center. Inurnment with a graveside service will be held at Evergreen Cemetery in Vinton, IA, on Saturday, May 29, 2021 at 1:00 PM with Deacon Steve Ford celebrating. Marie Catherine Mahood, daughter of Harvey Mahood and Inez Quakenbush Mahood, was born on November 18, 1923, in LaPorte City,IA. In 1942 she graduated from Vinton High School where she was in the National Honor Society and was Homecoming Queen. After high school she worked in the Benton Co. Court House. On June 1, 1944, she married Robert (Bob) Wilson, whom she met in high school. In 1953, they moved to Jesup, IA, where Bob worked in the Farmers State Bank. In 1956, Bob was hired to work at the Livermore State Bank. Marie also worked as a cashier in the bank. Bob eventually became president of the bank until his death in 1982.They raised their daughters, Ann and Jane in Livermore. After Bob passed away, Marie attended Iowa Central Community College where she earned an AA degree. She served one term on the City Council and three terms as Mayor of Livermore. She was a founding member of the Friends and Neighbor’s Club, wrote as a correspondent for the Humboldt newspaper, was very active in the Humboldt Co. Democrats, was a board member of Humboldt Co. Y.O.U.R., and Elderbridge Agency on Aging. She served as chairwoman of the North Central Iowa Regional Solid Waste Agency which she helped organize. She promoted and participated in numerous community projects. Marie was an active member of the Sacred Heart Catholic Church. Marie enjoyed researching the history of Livermore and its citizens, which she included in her popular newspaper columns! She made many new friends while attending ICCC and through her travels to numerous countries. Left to cherish her memory are her daughters, Ann Wilson Bormann of Waukee, IA and Jane (Bill) Dahlhauser of Cedar Falls, IA; grandchildren, Erika (Dr. James) Krieg, Sylvia, Charlie and Theo; Erin (Jim) Wilkinson, Sierra and Sawyer; Dr. Kurt Bormann, Everett, Emory and Alden; Sarah (Ryan Selley) Dahlhauser and London; Lee (Lisa) Dahlhauser, Eli and Alex; Beth (Adam) Gravert, Sam, Jack and Ben. Marie was preceded in death by her husband; mother; father; sister, Dorothy; and brothers, Ken, Bob and Don. Cards may be sent to Ann Bormann, 770 SE Deerfield Lane, Waukee, Iowa 50263 or Jane Dahlhauser, 3025 West 1st, Cedar Falls, Iowa 50613

Marie Wilson, age 97, of Livermore, IA, passed away on February 12, 2021, at the Clarion (IA) Wellness & Rehabilitation Center. Inurnment with a graveside service will be held at Evergreen Cemetery in Vinton, IA, on Saturday, May 29, 2021... View Obituary & Service Information

The family of Marie Wilson created this Life Tributes page to make it easy to share your memories.

Marie Wilson, age 97, of Livermore, IA, passed away on February...

Send flowers to the Wilson family.