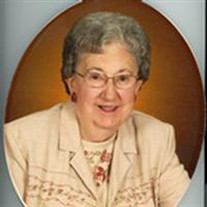 Marjorie L. Jacobs, 92 of West Bend died Tuesday, January 20,2015 at the West Bend Care Center. Services will be held Thursday, 11:00 AM at the United Methodist Church, West Bend with burial to follow in the West Bend Cemetery. Visitation is from 9:00 - 11:00 AM Thursday at the church. Harris Funeral Home, West Bend is in charge of arrangements.Marjorie L.(Arnold) Jacobs, the daughter of Charles and Anna (Warner) Jacobs was born August 19, 1922 in Ryan, Iowa. She graduated from the Manchester High School in 1940 and then attended Iowa State Teaching College. She taught rural school at Delaware County, Palo Alto County and Pocahontas County and later taught as a substitue. In 1941, Marjorie was united in marriage to Harold Jennings in Maryville, MO. The couple estalished their home in West Bend and then moved to Red Oak, IA in 1948. She then worked for Union Carbide, where she took pride in the development and the growth of the company. In 1965 Harold passed away. Marjoire worked for Union Carbide for 30 years until her retirement in 1978. In 1977 she was united in marriage to Donald Jacobs in Red Oak. The couple then returned to West Bend where they lived during their married lives. They started spending their winters in Texas, and Marjorie continued to spend them there after Donald died in 1997. Survivors include her sisters Dorenn Renfrow, Betty Bethurum, and brothers Dorrance Arnold and Dean Arnold. She was a member of the United Methodist Church where she served as treasurer. She wsa also a member of the Historical Society, the Eastern Star, a past Mother Advisor of the Order of Rainbow Girls, and the White Shrine of Jerusalem in Shenandoah. Marjorie was preceded in death by her parents, infant son LeRoy, husands, Harold and Donald, infant sister Charlene and brother Kenneth and Dale. www.harrisfuneralservices.com

Marjorie L. Jacobs, 92 of West Bend died Tuesday, January 20,2015 at the West Bend Care Center. Services will be held Thursday, 11:00 AM at the United Methodist Church, West Bend with burial to follow in the West Bend Cemetery. Visitation is... View Obituary & Service Information

The family of Marjorie Jacobs created this Life Tributes page to make it easy to share your memories.

Send flowers to the Jacobs family.